Fr. JOE says " ALL THE NUMBERS RELATED TO ALCOHOLISM AMONG WOMEN ARE TRENDING UPWARDS" A SUNDAY TIMES OF INDIA REPORT 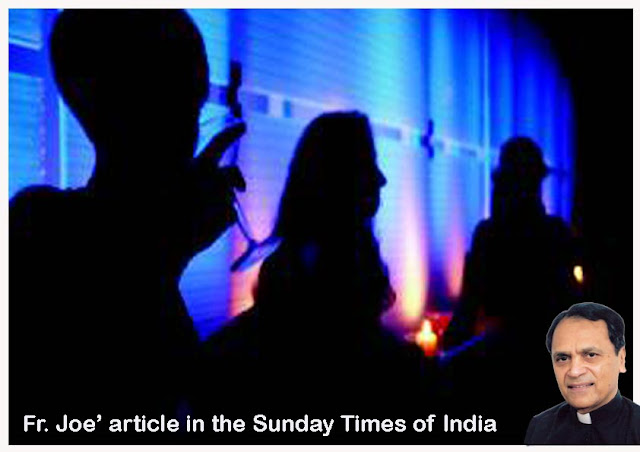 BOTTLED UP
Alcoholism in women on the rise,but few seek help


Your mother,sister or daughter could be a closet drinker.You probably know it,perhaps consider it a dirty family secret and have run out of ways to camouflage the signs.It could be a matter of time before shes alcohol-dependent,and youll either leave her to fate or seek a way out.

Alcoholism among women is not just hitting the high numbers in the rest of the world,but in India too.According to Fr Joe Pereira,Founder Managing Trustee of the deaddiction centre Kripa Foundation,this rise is most marked among career women.They consider themselves equal to men and enjoy the benefits of improved incomes and easier access to alcohol, he says,but unfortunately the opportunities for deaddiction,although equally available to women,are not equally availed of by them. This observation has been borne out by the fact that in 32 years,Kripa has seen over 40,000 men approach it but barely 400 women.

What holds Indian women back from coming out of the liquor closet is the shame of being identified as alcoholic and,by extension,disreputableharpies who transgress social codes and defile the righteous image of Indian womanhood.At a recent press meet to introduce a contingent of recovering women alcoholics,most of whom were from Australia and New Zealand,Daler Singh,chairman of Alcoholics Anonymous (AA) India,noted that of the 30,000 or so recoverees in India since the inception of AA here 55 years ago,less than 100 have been women.Its why we were asked to come to India, said Louise Dunne,a psychologist and Class A Trustee (non-alcoholic member of AA) at the press conference,to encourage women to break free of the stigma.

Some have tried and succeeded.Angela,who turned alcoholic by age 23,is now 50 and has been sober for 22 years.When she announces this,in what is the standard preamble of any recovering alcoholics address at an AA meeting ( Hi,Im Angela and Ive been sober 22 years ),shes greeted with applause,not least from the three other female recovering alcoholics in the room.When I attended my first AA meeting 25 years ago,I was the only woman there, says Angela,who used to trek down to the fellowship at Colaba from her home in Bandra for extra cover.But when she did start going to meetings in Bandra,and was in fact caught out,she realised it really made no difference because people knew she was an alcoholic anyway.What mattered was her commitment to recovery.

It is very challenging to get women out, says Rameela,a recovering alcoholic whose mission to help other women alcoholics led her to join the General Service Office (GSO) of AA India.We plan to strategise on how best to draw women alcoholics out;where to conduct all-woman meetings;and focus on building a database of women who can,in turn,reach out to others.

One of the obstacles to drawing women out to the AA fellowship is that all meetings in Mumbai,save one in Bandra,are attended almost entirely by men.It makes it harder for women to come clean in their company.In fact,the family of Lata,an alcoholic,though supportive at home and keen that she be rehabilitated,discouraged her from attending AA meetings,where she was the only woman.Women,when they attend meetings,stick around for short spells and quit as soon as they start to get a handle on sobriety, observes Lata,who attended only 15 AA meetings at the start of her deaddiction journey.I continued to practise the AA-recommended 12-Step Programme independently,but its not easy

.Few manage to stay sober on their own,without the support of a peer group. While increased advocacy aims to give women courage and draw more of them out,support systems are also being strengthened to hold the spillover.Kripa,which currently runs one residential rehab centre in Pune solely for women,is building one more in Colva,Goa.As more women actively seek out recourse,the facilities available to them will correspondingly improve.

Fr Pereira points out that not all the numbers related to alcoholism among women are trending upward.Girls are now drinking at a younger age, he says.For long,the youngest alcohol addict at Kripa was a 13-year-old girl,until a 9-year-old was brought in recently. He admits there's much work to be done in rural parts too,where alcoholics have fewer exit doors to recovery.In a recent survey conducted in the villages of Mokhada,Wada and Palghar,we discovered that there was an alcoholic woman in 900 of 2,500 homes, he says.
It is slow going,but the outreach to women alcoholics in India is slowly picking up speed.And its chiefly because women are coming to see themselves as deserving of everything a man has access toincluding help.

AA meetings for women take place at St Peters School,Bandra.The AA helpline is 23016767
The Spirit of Women,a documentary on women and alcohol,will be screened from Feb 21 to 24 at Sophia Polytechnic,Breach Candy