Fr. Joe Class A Trustee of AA- announces the Jaipur convention to Kripa Family through GSO 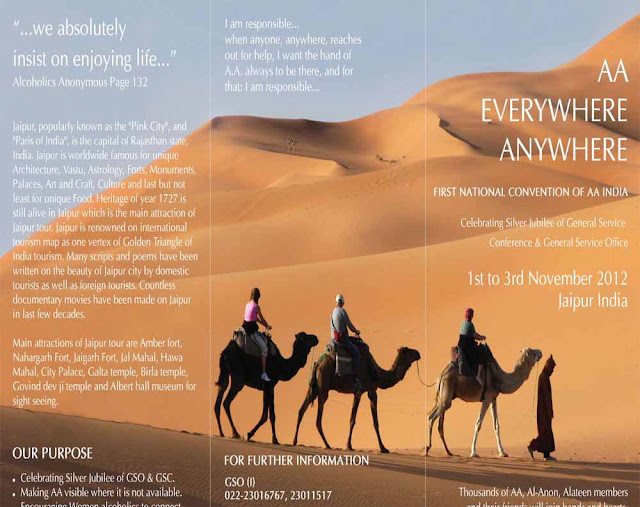 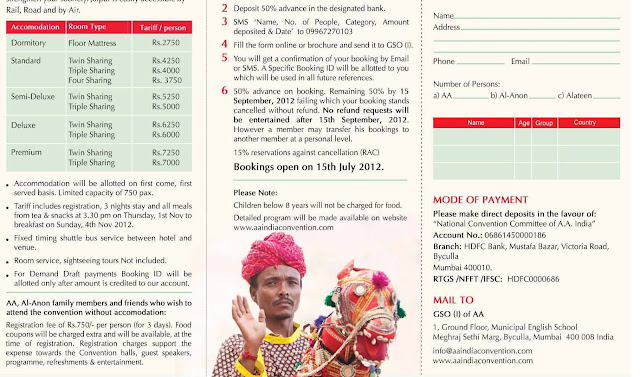 Dear Sir/Madam,
Greetings from Alcoholics Anonymous India
We acknowledge and appreciate the wonderful work you do to help people recover from their alcoholism. The fellowship of A.A. is the single largest resource for the sustenance of the recovery with its recovery program and vivid literature
The 12 step program of A.A helps one to stay sober “ONE DAY AT A TIME “& the A.A conventions, conferences, seminars help in genuine fellowshipping, hope and good humor. The two and a half day program includes in-depth understanding of A.A .sharing on different topics, discussion of relevant issues and entertainment.
The convention is purposefully organized in north India in respect to over 70 % of more than 2,50,000 callers in total after the episode of Amir Khan’s Satyamev Jayte on Alcoholism

The forth coming first National A.A convention in Jaipur is one such opportunity for your recovering patients to strengthen their sobriety .We are inviting your participation with your employees, discharged and indoor patients to Jaipur for rejuvenating, refreshing and renewing their recovery.
The detailed brochure of the convention is attached for your reference.
Looking forward meeting you all in Jaipur during November 1-3, 2012

Posted by Kripa Foundation at 4:04 AM

Celebrating 31 years with Friends of Kripa- A Musical Nite 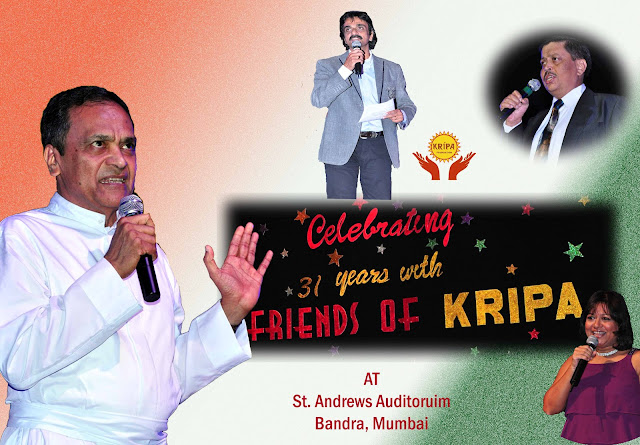 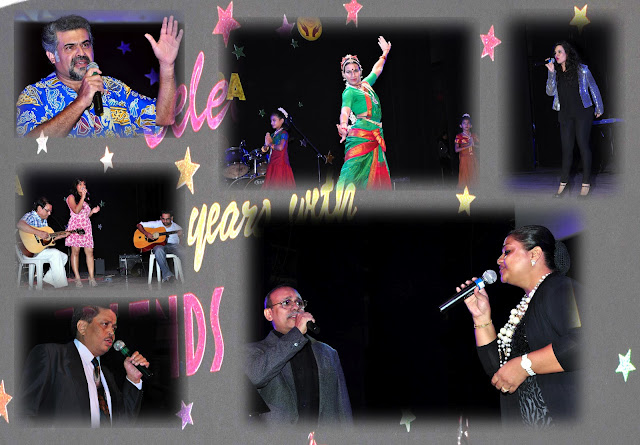 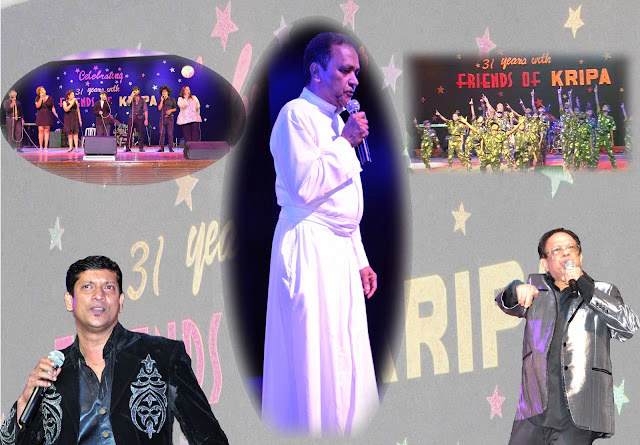 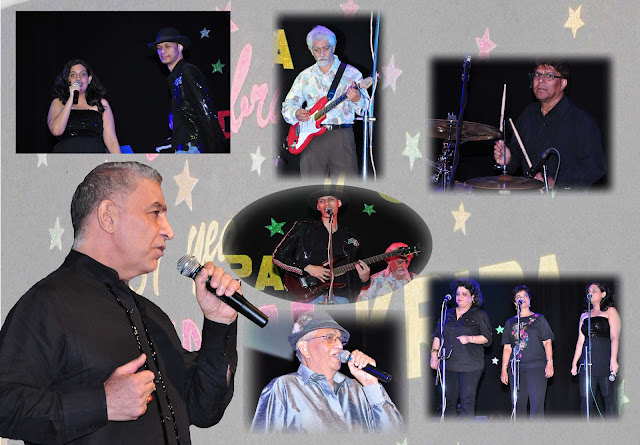 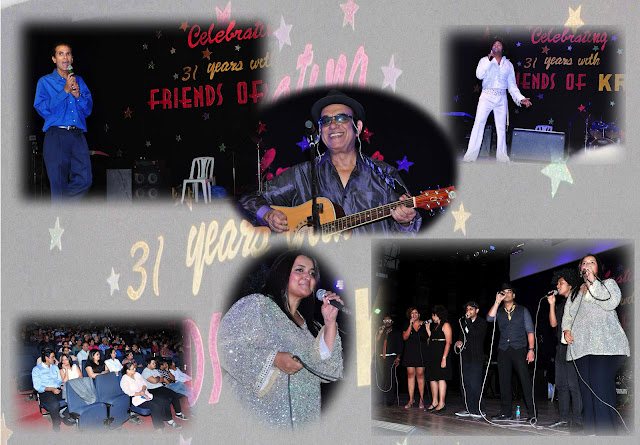 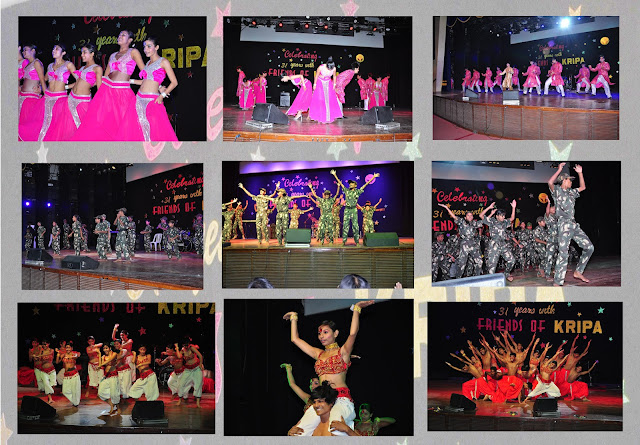 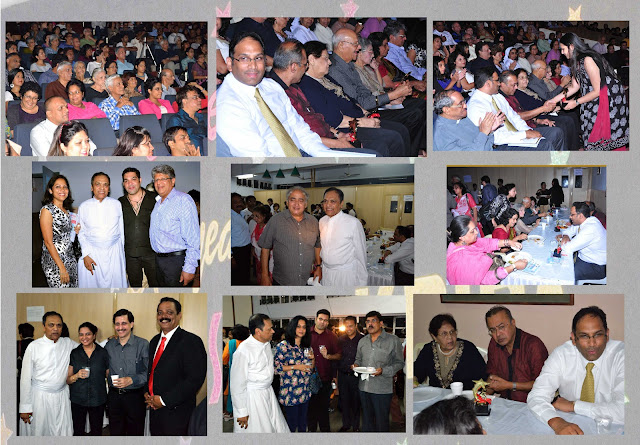 August 15, 2012 marked another milestone for Kripa Foundation, as we celebrated our 31st anniversary by hosting an aptly titled entertainment show, ‘31 years with Friends of Kripa’ at St. Andrew’s Auditorium in Bandra (West), Mumbai.
The event began at 7.30pm and featured various performances that kept guests enthralled through the evening. Budding talent Tara rendered Whitney Houston’s popular song “I’ll always love you’. Darren Das lent his voice to other renditions, captivating the discerning audience. A major highlight was a professional and unique dance performed by the renowned Shiamak Davar Dance Troupe from the Victory Arts Foundation. Kids from Kripa Dharavi also entertained guests with well choreographed dances. These children were trained by Davar as part of Kripa’s community outreach and social responsibility activities. This exquisite dance set the mood for the rest of the evening. Marie Paul and Edward Mendis sang a duet while the ‘Raagatrippin’ band performed the Acapella, which was well liked by our audience. Suzanne D’Mello’s songs added further glitz to the already star laden evening.
The show’s producer, Felix Flor, sang a Spanish song while Siddarth Meghani brought to life, memories of Elvis Presley, the King of Rock and Roll. Dr. Dilip Nadkarni revived the warmth of our city, Mumbai, through his lively Hindi song, Mumbai Meri Jaan.
Fr. Joe sang a special song, ‘The Impossible Dream’. He spoke about the various aspects of Kripa Foundation, including its mission, vision, goals and achievements. In his speech, Fr. Joe profusely thanked the support extended by organizations and individuals for aiding Kripa Foundation and the guests of honor for the evening, which included Mrs. Joy Pereira, Mr. Julio Ribeiro, Mr. D Sivanandan, Dr. Francis Pinto, Mr. Sanjeev Noronha, Mr. Ajay Lakhanpal, Mr. Geoffrey Nagpal, Mr. Joachim Reeves and prominent personalities which included Trustee Mr. Yazdi Desai. As a token of gratitude a memento was given to each of them.

Kripa Foundation released a special souvenir to mark its 31st anniversary, which coincided with the 65th Independence Day of India and the Feast of Assumption of Our Lady, Mother Mary. Artistes and the Kripa family assisted wholeheartedly in organizing and conducting the event, which will be well remembered by the audience.

Posted by Kripa Foundation at 4:07 AM 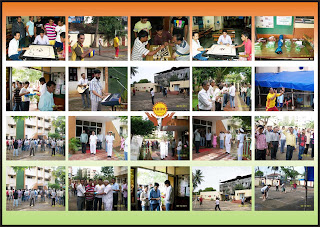 Submitted by
Mozen H.
Posted by Kripa Foundation at 8:44 AM

KINDLY CLICK THE PLAY ARROW TO VIEW THE SONG

Posted by Kripa Foundation at 8:29 AM 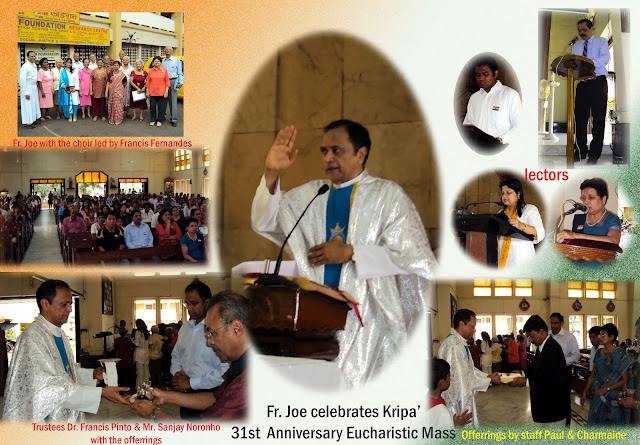 Fr Joe celebrated the 31st Thanksgiving service of the Foundation at Mount Carmel's church,  Bandra on the Feast of the Assumption of Our Lady and Independence Day on 15th August 2012 at 9.30 a.m.
﻿
In his introductory address to the gathering Fr. Joe thanked the Almighty for the "Grace", that was Kripa and complimented India's achievements over the last 65 years. The congregation consisting of Kripa Trustees, well-wishers,  staff and clients listened and watched   a power point presentation homily, in which Fr. Joe spoke of the true meaning of 'freedom' from all kinds of addiction. The offertory gifts were presented by Kripa Trustees, Dr. Francis Pinto and Mr. Sanjay Noronha followed by staff members Paul, Charmaine  and  Rohan. The choir was conducted by Mr. Francis Fernandes and the prayers of the faithful by Bosco.

Later that evening a musical concert tilted " Celebrating 31 years with Friends of Kripa " was held at St. Andrews auditorium, Bandra, Mumbai.
News Desk
Posted by Kripa Foundation at 4:27 AM 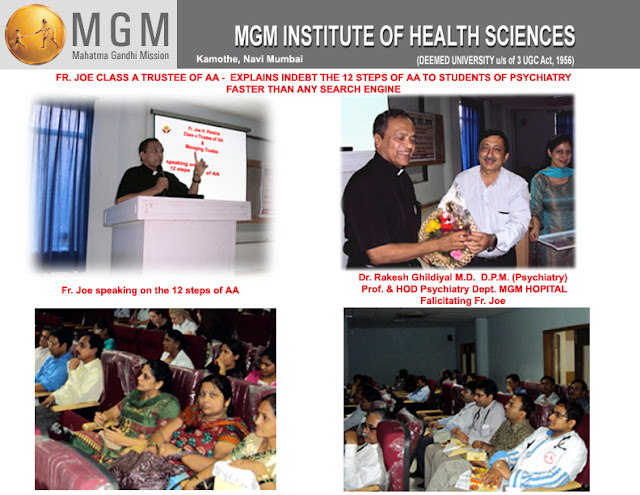 On an invitation from the MGM hospital AA group, Fr. Joe, Class AA Trustee was invited by the group  to speak to the Psychiatry Medical Students on the 12 steps of AA.In a limited time of less than 15 minutes Fr. Joe explained the 12 steps and how they as Medical faternities implement its values in thier practice of medicine. There was a sharing of life stories by recoveries and orientation of the t12 steps. The AA group was represented by Dharam. Sanjay and Ravindra.
Dr. Rakesh Ghildiyal who organised the seminar. spoke at length about the work of Fr. Joe and Kripa and his association with the organisation. Dr. Ghildayal feliciated Fr. Joe for his valuable time and input.

Newsdesk
Posted by Kripa Foundation at 4:45 AM