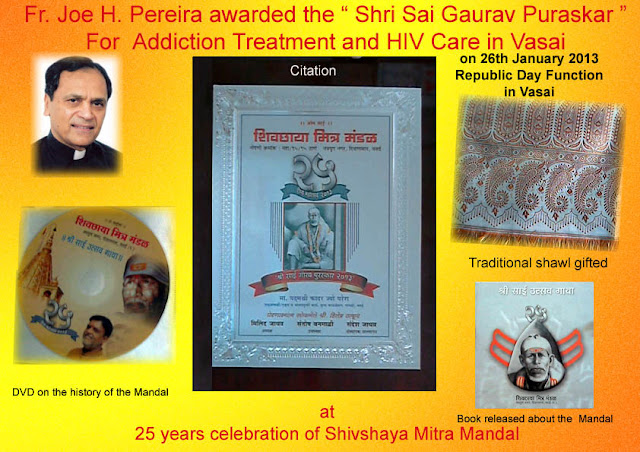 Double click image for larger view
Shrishaya Mitra Mandal  one of the oldest social mandal in Vasai, recently completed its silver jubillee. A series of events and functions where held to celebrate their 25th anniversary.  The Mandal helps out the locals in the region of Vasai in  activities of sports, education, civic issues and health care. The mandal is mainly the brainchild of dynamic corporator Shri Sandesh Jhadav, well supported by the committe members Santosh Vanmali and Milind Jhadhav, under the guidance of Lokneta Shri Hitendra Thakurji.
To commemorate the celebration, the mandal felicitated prominent personalities from the region of Vasai in different fields. Fr. Joe H Pereira, Founder Managing Trustee of Kripa Foundation was awarded the " Shri Sai Gaurav Puraskar " for his outstanding work in the field of Addiction and HIV especially in the region of Vasai- Virar.
Due to his prior commitments  with the Alcoholic Woman Group from USA, UK, New Zealand, Virgin Islands and Austrailia which was organised by the Australian Alcoholic Woman group, Fr. Joe was unable to be present to receive the award.
Mr. Santosh Vamali personally visited Kripa Vasai to handover the citation, shawl, book and DVD.
Photo by
Mousin H
Collage
Newsdesk
﻿
﻿
Posted by Kripa Foundation at 8:01 AM