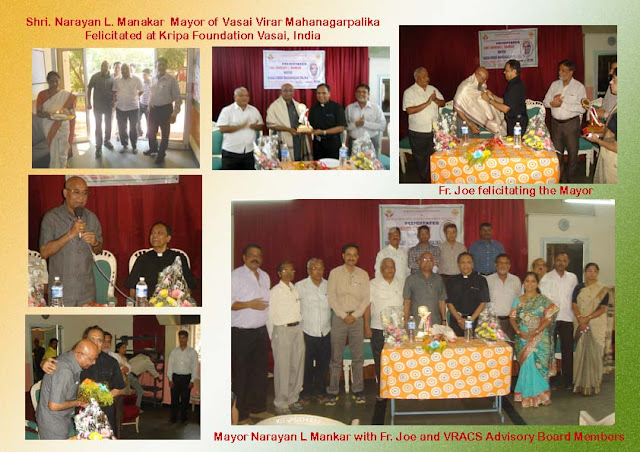 
The Vasai-Virar Municipal Council (VVMC) will up the ante against the spread of HIV  infection in the region, by actively involving the nine Reproductive and Child Health (RCH) centers in its jurisdiction while launching an awareness against this deadly scourge, Mayor Narayan L. Mankar, said in Vasai on Sunday, February 24, 2013. The VVMC will achieve this goal through its long-standing partnership with the Vasai Region Aids Control Society (VRACS), an initiative of the Kripa Foundation- India’s largest NGO in the field of substance de-addiction and rehabilitation, he added.


Mankar is also a member of the Elected Leaders Forum Against AIDS (ELFA), which was formed as a citizens action group to prevent the spread of HIV contagion in the region. Mankar said, the VVMC will also intensify and extend its public awareness campaign against AIDS through its Mother and Child Health (MCH) and the Adolescent Sex Education programs to broaden knowledge of this disease. The VVMC’s efforts will be augmented by education and awareness drives conducted by the Kripa Foundation, which operates a centre at Papdy, Vasai (West) near Mumbai and other ELFA members including Dr. Hemant Patil, who will spearhead the new offensive.


Kripa Foundation and VRACS on Sunday felicitated Mankar for his successful election as the second Mayor of the VVMC.  At a ceremony held at Kripa Vasai, Fr. Joseph H. Pereira, Founder  Managing Trustee, Kripa Foundation, lauded the role  played by Mankar and ELFA in helping control the HIV/ AIDS contagion in Vasai-Virar region. He noted that VRACS ( Vasai Region AIDS Control society), VVMC and Kripa have a joint responsibility in controlling and curbing HIV/ AIDS, since substance abuse leads to high risk behavior leading to unprotected sex that may cause the fatal disease. While Kripa is battling addiction, VRACS and VVMC can assist its efforts by combating AIDS, Fr. Joe, added.


Mankar in his address to the gathering said that Kripa and VRACS was his home and although being the first citizen of Vasai Virar , he will always be there as a board and family member.


Fr. Joe said he was pleased to see Mankar elected as the VVMC Mayor since the two have worked shoulder-to-shoulder  since 1995 in the region for its betterment. Both hail from Vasai and hence, it was apt that a local should hold the mayoral post, he noted. Later, Fr. Joe felicitated Mankar on behalf of Kripa Foundaton and VRACS advisory board members by presenting him a shawl and memento. Accompanying the mayor were Municipal council members Mr. Sandesh Jhadav and Dr. Hemant Patil along with VRACS board members Mr. Vanmali, Dr Bansode, Mr. Jagdish Shetty, Mrs. kanekar, Mr. Amrohi, Mr. Sharad Vichare, Dr Menon and Mr. Bosco D;Souza.


Fr. Joe hosted a luncheon for Mankar and his delegation along with the advisory board members of VRACS.
Submitted by
Ashwin Honawar
Collage
Newdesk


Posted by Kripa Foundation at 9:21 AM