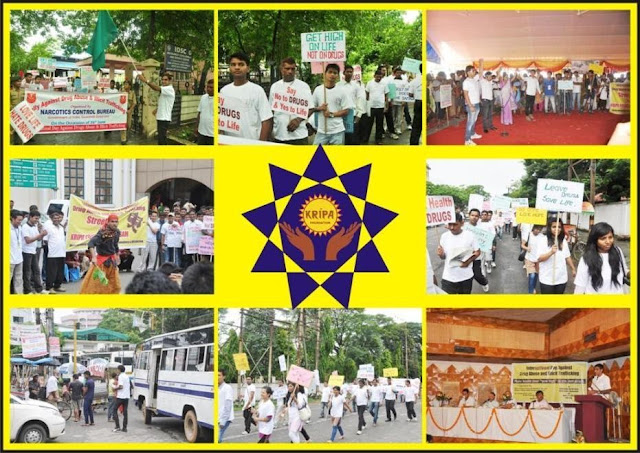 International Day against Drug Abuse and Illicit Trafficking
On 26th June 2013, Kripa Guwahati commemorated Anti Drug Day in collaboration with Narcotics Control Bureau.
A rally was organized that was flagged off from Cotton College, Panbazar. Many In-house and Ex-clients, Staff and Trainess students participated in the rally. Pamphlets and Posters were distributed and displayed at strategic locations. Post Rally, street plays were performed in various parts of the city depicting the life of an addict, his problems, role of the counselor in helping him to be restored in the mainstreams of society.
A panel meeting was organized by Directorate of Social Welfare, Assam, Assam State AIDS Control Society in collaboration with Kripa Guwahati and NESPYM, Guwahati  at  Vivekananda Kendra Auditorium. Various Dignitaries from Social Welfare Department and other Government Departments graced the occasion. The present drug scenario was discussed and each representative was called upon to present a strategy in curbing the menace.

Submitted by
Kripa Assam
Collage
Mozen H
Posted by Kripa Foundation at 2:32 AM