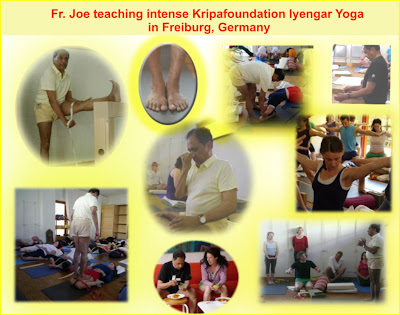 Fr. Joe appoints the New Advisory Board for kripa Bandra 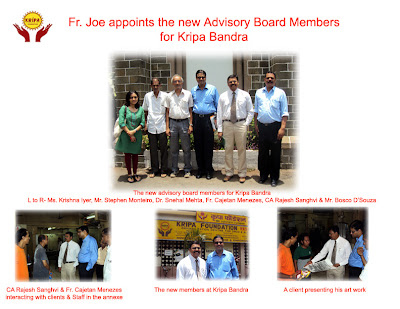 Kripa Mount Marys Office.
Posted by Kripa Foundation at 3:33 AM 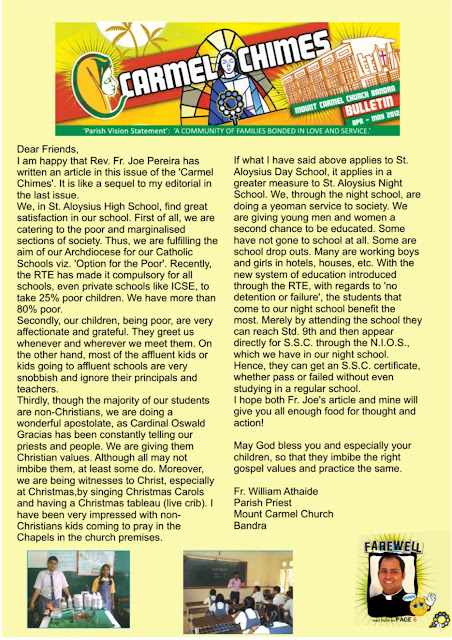 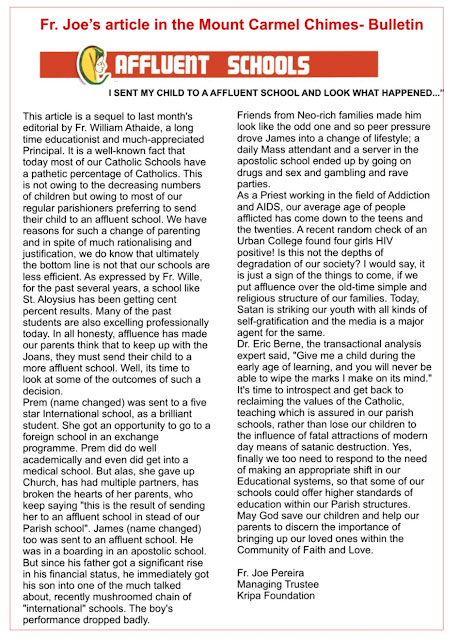 Double click image for larger view
Posted by Kripa Foundation at 10:30 AM 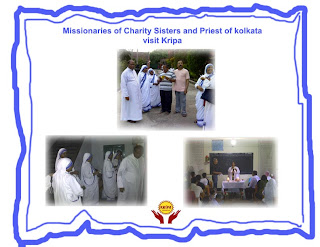 Double click for larger view
It was a memorial day for kripa Kolkata, when Priest and Sisters from Missionaries of Charity paid a visit. The priest and religious  interacted with the clients and  listened to their life stories, and also enquired about Fr. Joe. The visit ended with the celebration of the Eucharist  and blessing each client . The highlight being the participation of clients of different Faiths.
Submitted by
Sandeep Mitra
Kripa Kolkata
﻿
﻿
Posted by Kripa Foundation at 9:30 AM

Sad demise of Staff from Pune 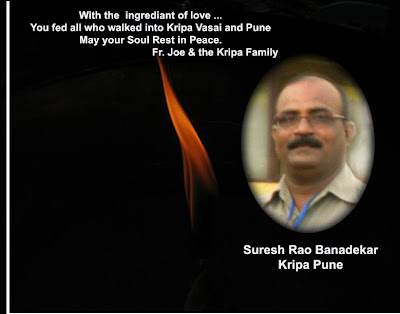 Double click image for larger view.
We regret to announce the sudden demise of Suresh Rao Banadekar our senior staff from Kripa Pune, leaving behind his wife and children. May his soul rest in peace.
News Desk
Posted by Kripa Foundation at 5:13 AM 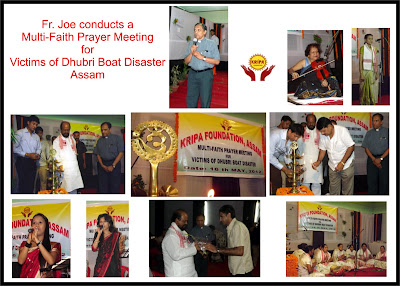 Double click image for larger view
Due to the tragic boat accident in Dhubri, Assam, the annual celebration day at Kripa Assam was cancelled and a Multi-Faith Prayer meeting was held in memory of the victims who died in the boat accident. Fr. Joe Pereira lead the prayer service along with the Chief Guest Mr. Akon Bora Hon'ble Minister of Social Welfare Assam along with Mr. Deebjot Singh Sahney, Staff, clients and around 200 well wishers.
Submitted by
Jagrata Bora
Kripa Guwahati
Posted by Kripa Foundation at 4:42 AM 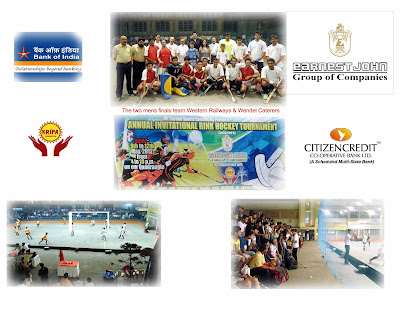 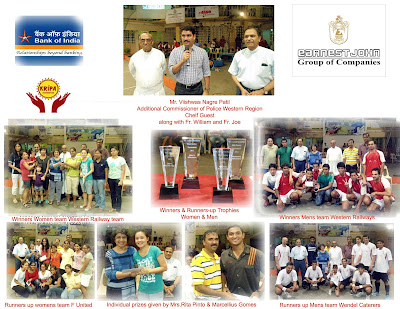 Double click image for larger view
A rink hockey tournament was organised by the youth of Mount Carmel Church and Kripa Foundation, sponsored by Earnest John and Company, Bank Of India, Citizen's Co-operative Bank Ltd. and sound by Aloo Sounds. Various teams with players from all over the country participated in the tournament. Western Railways were the winners in both men and Women categories.
The chief guest Mr. Vishwas Nagre Patil, Additional Commissioner of Police -Western Region in his address to the spectators applauded Kripa and the youth of Bandra for organising such tournaments, particullay these days when synthetic drugs are dangerously eroding into the lives of our youth and ruining their lives. He even went on to recite a stanza of a poetry which got the whole stadium applauding him to a standing ovation. Mr. Nagre Patil congratulated Fr. Joe and Fr. William Athaide the Parish priest of Mount Carmel Church, Bandra, for holding such a fantastic tournament. In his short but crypt speech he stole the hearts of the youth .
Individual prizes were given away by Fr. William Athaide, Marcellus Gomes and Mrs. Rits Pinto. The winning throphies were handed over by Fr. Joe to the winning teams. Tremendous work done by the organising committee of Viren Rasquinha, Claudius De Sales, Ludwig Vesaokar, Constance Amar, George Esteves, Enricho Fernandes, Gavin Vandrine, David Cardoz, and Elaine D'Souza. An applause to Mr. Stephen Monterio, staff and residence of Kripa Bandra for the logistic support under the abled guidance of Fr. Joe Pereira and Fr. William Athaide
Submitted by
Brett Rodricks.
Kripa Bandra
Posted by Kripa Foundation at 12:49 AM 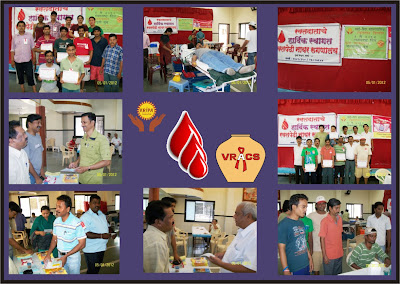 Double click image for larger view
Vasai Region AIDS Control Society had put up an Awareness Stall at Sukrutindra Kala Mandir Hall, Vasai gaon on 01st May 2012, Maharashtra Day. The VRACS resource team gave valuable input on HIV AIDS, Addiction, Services and facilities of the Kripa Nursing Home, ART Treatment, Counselling & Admission services, Kripa Model of Treatment, Holistic Methodologies like Yoga & Meditation.
Under the aegis of the Vasai-Virar Municipal Corporation, Yuva Vikas Mandal, Prabhat Krida Mandal, G.S.B Samaseva Sangh and Vasai Region AIDS Control Society (VRACS) set up a Blood Donation Camp in collaboration with Nair Hospital. A total of 98 bags were collected. Kripa clients and staff contributed by donating around 18 to 20 bags. The Donors were presented gifts and certificates by the Organizing Committee.
Dr. Hemant Patil, Speaker, VVMC gave a speech on the importance of Blood Donation and also thanked the Donors. Mr. Raut gave the vote of thanks followed by a sumptuous lunch to all those present for the occasion.
Submitted by
Mozen H.
Kripa Vasai
Posted by Kripa Foundation at 9:53 PM

Dr. Rajan Khobragade (IAS)  Team leader National Technical Support Unit, NACO visited Kripa Bandra to understand the Kripa model of treatment,.and interacted with Fr. Joe Pereira the Managing Trustee, who explained the holistic approach to recovery, which included the 12 steps program of AA, specially designed yoga asanas to give power to the body and improve the mind, thus creating a measurable impact to a positive immunity along with the support of nutrition medicines.
To a question of "Whats the objectives of life" Fr. Joe replied "LIFE", further explaining that one should celebrate life as Mother Teresa always spoke of " The Joy of Living, Serving,Giving and Caring ". Dr. Rajan Khobragade was accompanied by Mr. Deepak Dobhal Technical Specialist NISU, NACO and  Mr. G.S. Shreenivas Team leader, Technical Support Unit, Maharashtra along with Mr. Bosco D'Souza of Kripa.
News Desk

Posted by Kripa Foundation at 1:15 AM