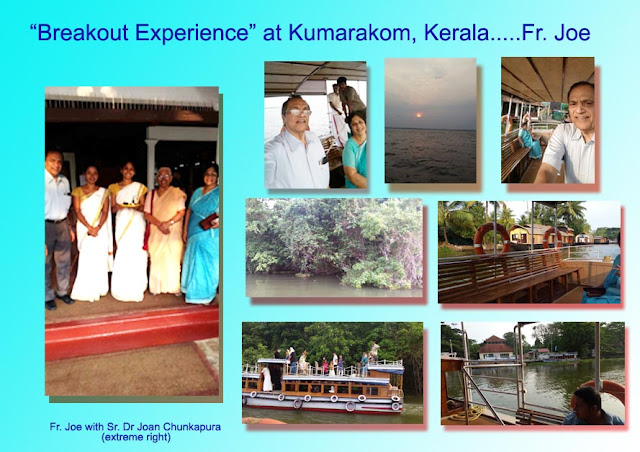 Kumarakom is a popular tourism destination located near the city of Kottayam, in Kerala, India, famous for its backwater tourism. It is set in the backdrop of the Vembanad Lake, the largest freshwater lake in the state of Kerala.
Kumarakom has a wide variety of houseboats and is well known throughout the world for houseboat experience. They are used only for tourists these days. A separate boat known as Kettuvallam is used by the people to go fishing or to transport goods. Apart from these, there are elegant special boats like Kochu-odi Vallam, Odi-Vallam, Iruttukutthi Vallam, Churulan Vallam and Chundan Vallam(Snake Boat), which take part in the boat races around Onam time. More than 1000 oarsmen in boats of different sizes and shapes will participate in this event. Even though Snake Boats participate in this race.
After the workshop Sr.Dr. Joan Chunapura and the team of TRADA, took Fr. Joe on a bpat cruise in the backwaters ending the workshop with a sunset meditation.
Newsdesk
Posted by Kripa Foundation at 10:00 AM

Fr. Joe conducts a two day workshop on Treatment of Somato-Psychic Disease through Yoga and meditation at TRADA MANGANAM, KOTTAYAM 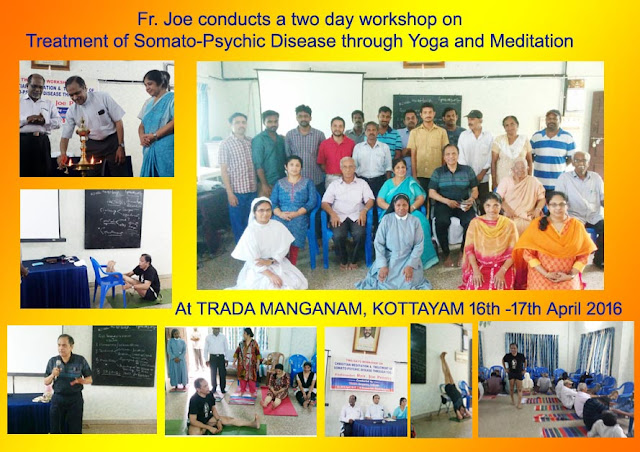 NEWSDESK
Posted by Kripa Foundation at 7:02 AM

Namaskar,
The Ministry of AYUSH, Government of India has organized and international yoga fest as a curtain raiser to the International Day of Yoga, 2016 at the Talkatora Stadium in New Delhi from April 20 to 22, 2016. Attached is the programme. It is open to all yoga lovers.
The highlight of the programme is that our Guruji BKS Iyengar is to be honoured for his lifetime work on April 21, 2016 with a special event. This includes a class by Prashantji, talks by him and some eminent personalities, an audio-visual presentation of Guruji’s life and works, live demonstration of asanas, presentation on the use of props, films of Guruji’s practice and an exhibition on Guruji. There is NO entry or registration fee and this entire event is open to public.  So, please share this message with all your friends and family especially those living in the NCR.
However, registered delegates could avail of an entry pass, delegate kit and working lunch coupons for the three days. Those interested should send in their names to the respective desks or info@Bksiyengar.com ASAP.. as the same would need to be forwarded to the organizers.
RegardsLight of Yoga Trust 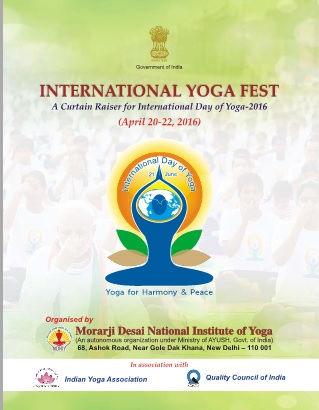 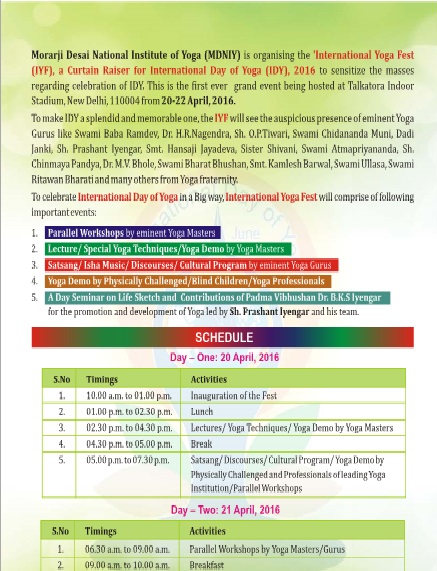 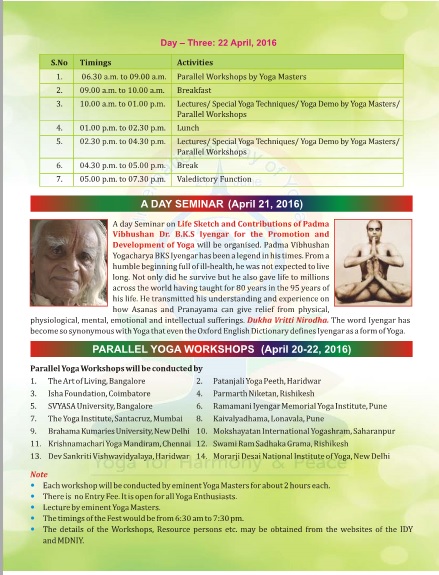 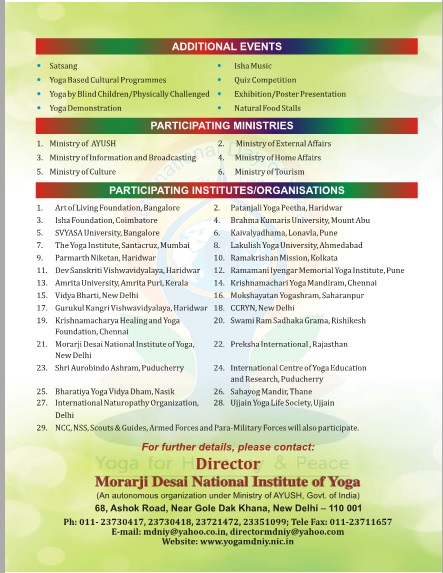 News Desk
Posted by Kripa Foundation at 5:23 AM

Sad Demise of A Dear Friend of Kripa...Mrs.Frenny Motivala 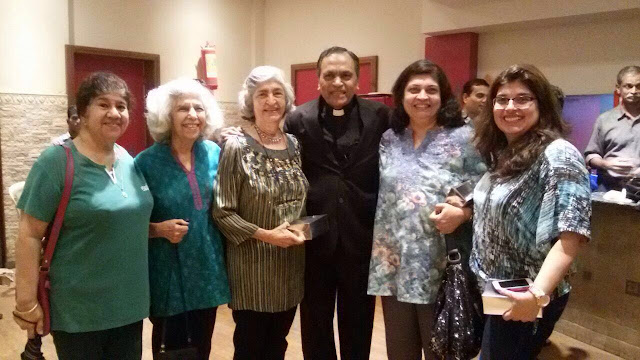 .Mrs. Frenny Motivala is to the right of Fr. Joe

We regret to announce the sad demise of Mrs. Frenny Motivala, wife of late Sam Motivala. Mr & Mrs. Motivala were the senior most couple of Iyengar Yoga. As mentioned by Fr. Joe " Sam and Frenny were so close to me and my work of Kripa, that they got Yogacharya B.K.S. Iyengar to Kripa Vasai, to  inaugurate the B.K.S. Iyengar Yoga Hall." He further added that that he cherishes great memories of her. Fr. Joe attended her funeral at "The Tower of Silence m Mumbai" May God Grant Her Eternal Peace.

News Desk
Posted by Kripa Foundation at 9:28 AM

At Invitation to a Talk by My Great Friend Fr. Joe @ UKESAD - UK - Lady Cosima

I have organised for my great friend Father Joe, Founder Managing Trustee of Kripa Foundation, to

come over and talk in  the UK for the first time, at the UKESAD Symposium on Addictive

Disorders. It would mean the world to me if my friends would support this  event, please click on the

invitation below and it will take you straight through to the ticket purchase for his talk on May 3rd at 2 pm.

Thank you, and I hope to see you there. and please forward this to  any friends who might be interested to hear his talk about "The  Spiritual Paradox of Addiction" 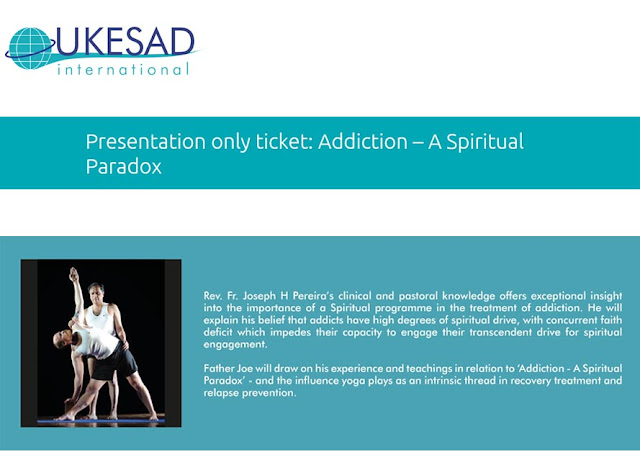 News Desk
Posted by Kripa Foundation at 8:39 AM 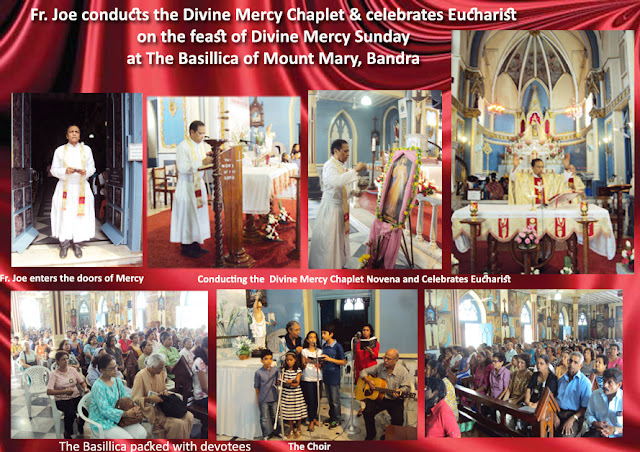 Today on the feast of Divine Mercy Sunday. Fr. Joe conducted the last day of the novena, and celebrated the Holy Eucharist. The Basilica was packed to full capacity as they listened to his homily with great attention, as Fr. Joe spoke in English, Hindi and Marathi as there were Devotees of different Faiths who were  present for the service. It was moving to see people on their knees praying with their hands spread out in true devotion.
Newsdesk

Ossie happy to meet his Family and Fr. Joe during Easter week. 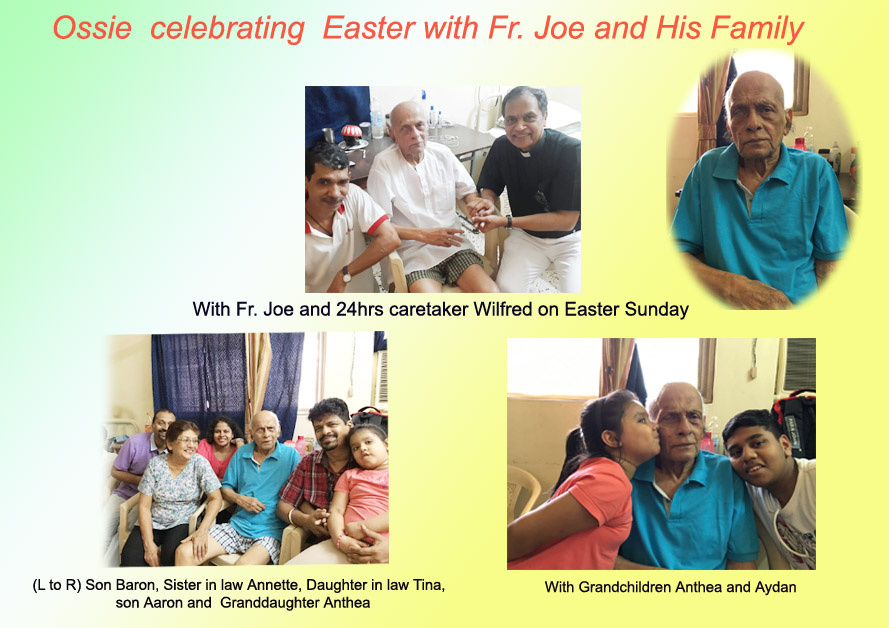 It was  indeed a happy and touching  moment for Ossie this Easter Week, when his sons Byron long with Ossie's Sister in Law Annette , son Aaron  his wife Tina and children Aydan and Anthea visited him at  kripa Vasai . They spent the whole day with him and had lunch together It was nice to see Byron come from Delhi and Aaron from Dubai be with us at Kripa Vasai, mingle with the boys, share  great  memories and give Easter goodies to all with fruits and snacks at tea time. Fr. Joe although occupied in Guwahati, for the 10th anniversary of Kripa Assam was in constant touch with the kitchen and Kripa staff to see that all care was taken.
Before Fr Joe could leave for Guwahati, he too spent sometime on Easter with Ossie. Thank You Fr. Joe, and Ossie's Family for making this Easter week of great Joy and Happiness for him..

Newsdesk
Posted by Kripa Foundation at 9:40 AM 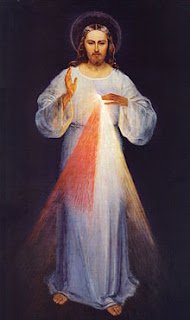 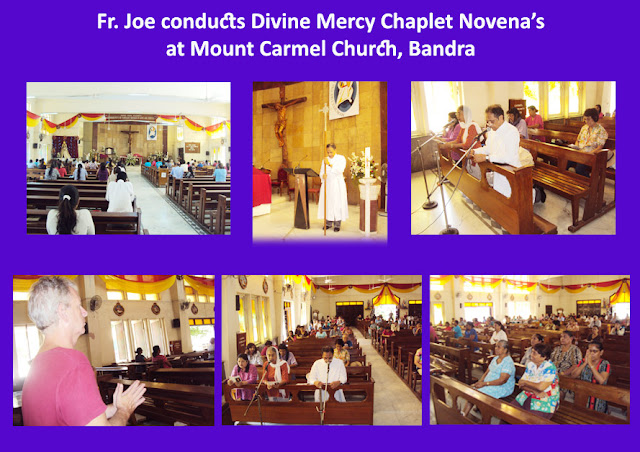 The Chaplet of the Divine Mercy is a Christian devotion, based on the visions of Jesus reported by Saint Mary Faustina Kowalska (1905–1938), known as "the Apostle of Mercy." She was a Polish sister of the Congregation of the Sisters of Our Lady of Mercy and canonized as a Catholic saint in 2000.[4]
Faustina stated that she received the prayer through visions and conversations with Jesus, who made specific promises regarding the recitation of the prayers] Her Vatican biography quotes some of these conversations
As a Roman Catholic devotion, the chaplet is often said as a rosary-based prayer with the same set of rosary beads used for reciting the Holy Rosary or the Chaplet of Holy Wounds, in the Roman Catholic Church.
Pope John Paul II was instrumental in the formal establishment of the Divine Mercy devotion and acknowledged the efforts of the Marian Fathers in its promotion in a Papal Blessing in 2001, the 70th anniversary of the revelation of the Divine Mercy Message and Devotion. Although the prayers said on the beads of the rosary chain share specific similarities between the Chaplet of Divine Mercy and the Chaplet of Holy Wounds, these are distinct chaplets and were introduced over 20 years apart, one in Poland, the other in France.
The chaplet in normally said at 3.00 noon and repeated over a period of nine days as part of a novena. According to Faustina's words, Jesus himself in a vision asked to pray the Divine Mercy Novena as a preparation for the Feast of the Divine Mercy, celebrated each year on 1st Sunday after Easter.

Posted by Kripa Foundation at 8:00 AM

The show continues... Fr. Joe addresses at the superannuation for Professor Priscilla Paul with a talk at a Symposium " Adolescents & Addiction" 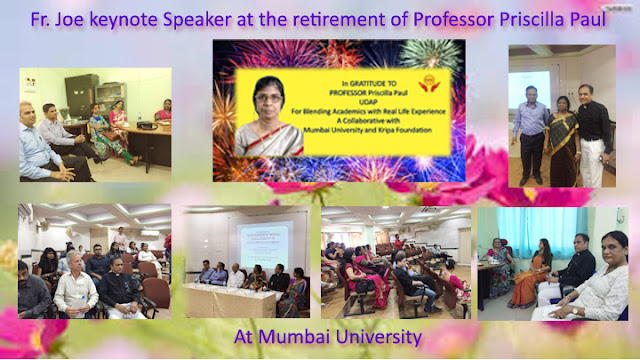 Adolescence is often described as a period of increased impulsive and risk-taking behavior and a state of conflict. Rape, unsafe sex, binge drinking, doing "macho stuff" for a dare and participating in communal riots are contemporary form of such behavior. This behavior could lead to fatal outcomes -  accidents,suicide, police arrest, AIDS etc.to this disquieting list are added less dangerous but equally morbid behavior such as self harm,attempted suicide and an almost narcissistic or even neurotic view of one's own body. In this symposium, the idea was to review the nature of adolescent risk-taking behavior. we will attempt to track the contemporary cultural context in which such behavior is encouraged and suggest suitable psycho-social and educational interventions.


The University Department of Applied Psychology and Counseling Centre decided to conduct Symposium on the 30st of March 2016, to commemorate  the superannuation of Professor Priscilla Paul, titled Adolescent' Moral Engagement in Contemporary India"  At such a grand function Fr. Joe spoke on " Adolescents and Addiction" which received a grand standing ovation. There were also different distinguished speakers who spoke on various topics. Also present at the function was  Vice Chancellor Dr. Sanjay Deshmukh.

Photographs
Ms Krishna Iyer
Posted by Kripa Foundation at 7:20 AM 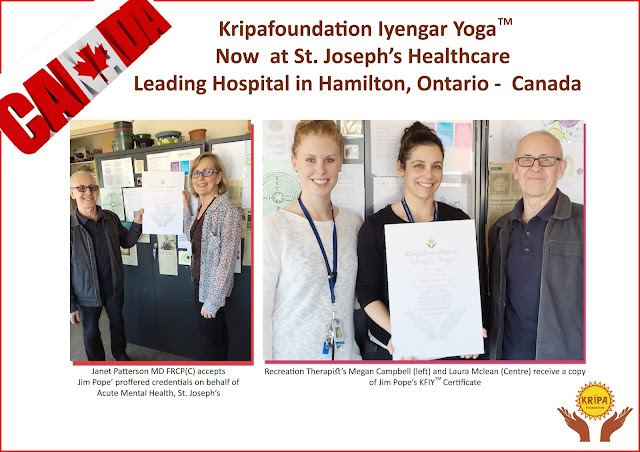 It’s noteworthy to know that Dr Patterson has striven for years to gain acceptance KFIY on the ward. Programs are well attended and feedback from patients & clinicians alike is overwhelmingly positive.
Thank you Dr Patterson!
Newsdesk
Posted by Kripa Foundation at 11:00 AM