The priest is the president of the Kripa Foundation, a Mumbai NGO, that also cares for AIDS patients. In 1971 a spiritual crisis, then his meeting with the Saint from Calcutta. "She taught me to look for the poorest of the poor among the sick." His book "Dependency - A spiritual paradox" presented to the public.


Mumbai (AsiaNews) - A meeting with Mother Teresa "pushed me to work for addicts" Fr. Joe Pereira, president of the Kripa Foundation, tells AsiaNews. The Mumbai NGO that has been involved in the recovery of AIDS patients and drug addicts for 36 years. The priest recounts that he met the Saint from Calcutta in 1971, at a time when he was experiencing a spiritual crisis.

"Mother Teresa - he says - Mother Teresa called me to assist her with the many cases of people who had gone into abject poverty as a result of addiction. Mother Teresa epitomized compassion. As Mother Teresa taught me to reach out to the poorest of the poor, so did Guruji B.K.S. Iyengar [among the most famous yoga teachers of all time known for studying the therapeutic effects of practice] helped me reach the poorest among the poor among the sick. "

AsiaNews met the priest at the presentation of his book entitled "Addiction - A Spiritual Paradox". Written in conjunction with Dr. Ashok Bedi, Jungian analyst in Chicago, the book is the product of several years of drug-addiction research. The Kripa (which in Sanskrit means "grace") Foundation was born in 1981 in Bandra, a district of Mumbai. Today it has service centers in 40 countries around the world.

Fr. Joe states that "Mother Teresa was inspired and even assisted me in the creation of the Kripa Foundation. I started this adventure with three Asha Daan hosts [the structure of the Missionaries of Charity in Mumbai, which hosts abandoned children, HIV-positive and poor], and a few other people gathered from the road, in a complex adjacent to the Church of Mount Carmel to which I was appointed parish assistant ".

According to the priest, "in recent years, the average age of those who become addicted to drugs has fallen far to the adolescent range. So I need more support from the youth to fight this threat. Mother Teresa taught us that the best way to help is to take care of [the person]. In Greek, the word 'cara' means 'suffering with someone' and this is all the more true for drug addicts. There is a principle that says: ‘Mutual vulnerability commonly shared empowers the human being’. This is what is happening in Kripa all over the world. Our vision is to be global healers."

Since its first steps in 1981, the foundation has received the support of all archbishops from Mumbai. Card. Oswald Gracias, current head of the archdiocese, "is both patron and a member of the board of directors".

With regard to the book presented to the public, what prompted the authors to investigate addiction from a professional point of view is the awareness that there is a "deficit of faith" in the sick. The aim of the work, emphasizes Fr. Pereira, "is to transfer thirst for hallucinogenic substances into the original thirst for love and God." (NC)

Posted by Kripa Foundation at 5:34 AM

Fr. Joe's Greetings To You On the Festival of DIPAVALI 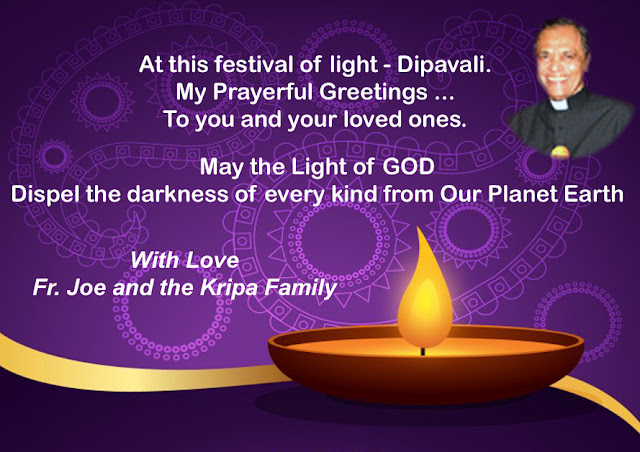 Newsdesk
Posted by Kripa Foundation at 9:34 AM