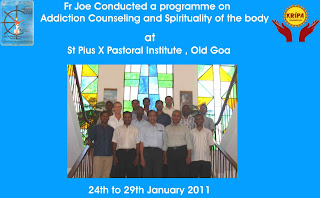 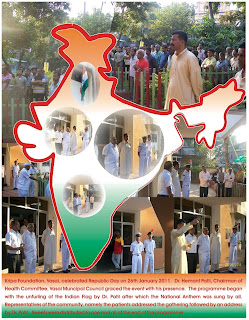 Double click image for larger view.
Kripa Foundation, Vasai, celebrated Republic Day on 26th January 2011. Dr. Hemant Patil, Chairman of Health Committee, Vasai Muncipal Council graced the event with his presence. The programme began with the unfurling of the Indian Flag by Dr. Patil after which the National Anthem was sung by all. Representatives of the community, namely the patients addressed the gathering followed by an address by Dr. Patil. Sweets were distributed to one and all at the end of the programme.
Submitted by
Jimi Amore
Kripa Vasai
Posted by Kripa Foundation at 11:21 PM

Fr. Joe spreading the message of recovery at a Sobriety Birthday- Thane Maharashtra. 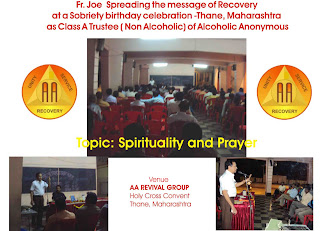 Double click Image for larger view
Fr Joe was invited to speak at an AA meeting conducted by AA Revival group, Thane Maharashtra. Topic- Sprituality and Prayer. The audience were spell bound as Fr Joe spoke intensely on the 12 steps of recovery and the importance of the 11th step of AA. - "Sought through prayer and meditation to improve our consious contact with the GOD as we understood Him, praying only for HIS will for us and the power to carry that out."
3 members of the fellowship Shyam 2 years, Lucky 15 years and Pushan 19 years celebrated their sobriety birthdays.
The meeting ended with the Sereinty Prayer.
News Desk

Posted by Kripa Foundation at 10:07 PM 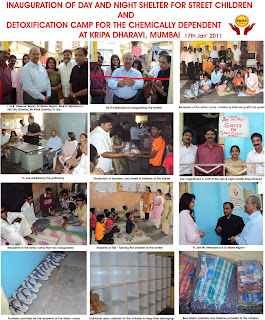 Double click image for larger view
A day and night shelter for street children was inaugurated on 17th January, 2011 by retired General of Police, and former Commissioner of Police Mumbai, Mr. Ronald H. Mendonca at Kripa Dharavi, Mumbai, in the presence of street children, active drug users who had come to be detoxed, Mr & Mrs. Vivek and Zita Goenka, Fr Joe Pereira, Dr Maria Nigam and Kripa staff. Also present were police officers from the local police station and students of the Tata Institue of Social Sciences. Also on this occasion a low cost detoxification camp was commissioned.
In his address to the gathering Mr. Mendonca expressed full support of the present police force towards this noble work. Fr Joe in his address thanked all present for their love and encouragement to help the street children and the chemically dependent. He invoked God's blessings and protection on the street children who would use the shelter.
An impromptu programme of dance and poetry was presented by the children to the guests. Footwear, blankets and toiletries, were distributed to the children who would staying at the shelter. The programmed ended with the singing of the National anthem.
News Desk
Posted by Kripa Foundation at 12:17 AM

Kripa's presence at the MUMBAI MARATHON 2011 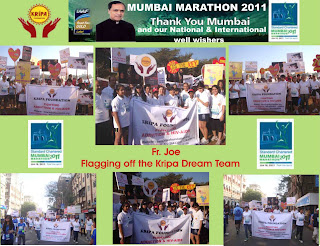 Double click image for larger view
Kripa Foundation participated in the biggest Marathon in Asia , the Standard Chartered Mumbai Marathon 2011. More than 50 supporters and runners including Kripa clients and staff, corporate heads, school children and athletes carrying posters and banners were flagged off by Fr. Joe at the Starting point. Kripa slogans were shouted by the team and the message HUGS NOT DURGS; FIGHT ADDICTION, JOIN KRIPA FOUNDATION, ETC.were shouted all along the 6 kms. stretch. Celebrities like John Abraham and Shaan who stopped by to read the posters, encouraged the team whole-heartedly.
It is our dream to rope in International participants at next year’s Marathon . DO BE WITH US ALL THE WAY in 2012.

Photos and report submitted by

Posted by Kripa Foundation at 5:56 AM 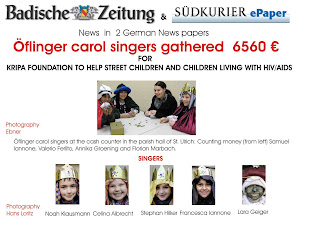 Double click image for larger view
Translated from 2 German newspapers
MILITARY-ÖFLINGEN (ykeb). The 36 Öflinger carol singers have completed the 2011 campaign. In three days they were motivated by the motto "Children show strength," in cold but dry winter weather, and carried from house to house, praying and singing the divine blessings in the open flats.

Celebrated the conclusion of the children and young people with their pets in the parsonage of St. Ulrich, where they quenched their thirst with a Cambodian rice dish. Meanwhile, Lucia had Berger, organized since 2009, carolers actions in Öflingen and forwards, determined the preliminary result of donations. Curious, carolers and companion pointed their ears, as Lucia Berger announced: ".. You've collected over the three days 6560 € I thank sincerely I hope you enjoyed it and you are again in 2012."

So the result is not quite as high as in previous years. € 2009 € 6690 collected the Öflinger, last year there were even 6776 €. As in previous years but is still to be expected that there will be increase by the amount subsequently received donations. It is pleasing that the carol singers and their companions everywhere and friendly welcome in their cassettes could not only accept donations of money, but also presented with sweets were. Lucia Berger will transfer the donation money to the Aachener children's charity. From there it will be to the Agency "Kripa Foundation in Mumbai (formerly Bombay) transfers, which was founded by the Indian priest, Father Joe Pereira (67) and still leads. The money will be used primarily for the treatment and care of infected patients and AIDS orphans. The sacred statements of carolers campaign celebrated the "Star Singer" at the Epiphany in the Catholic parish church of St. Ulrich.
As carol singers were on the move: Celina Albrecht, Franziska Avci Kim Bartkowski, Alessia Baumgartner, Sina Burczyk, Valerio Ferlito, Lara Geiger, Fabian Gudofski, Tamara Hanki, Sina Hauf, Stephan Hilker, Maria Hilker, Julia Huber, Francesca Iannone, Samuele Iannone, Jana Kaiser, Jannik-Aaron Kladisch, Noah Klaus Mann, Florian Marbach, Michael Marbach, Timothy Mertel, Melina Nitschmann, Fiona Nitschmann, Michael Pal, Daniela Pal, Tamara Pfanner, Jennifer Pfister, Victoria Pfisterer, David Princiotta, Sina Princiotta, Kira Rettig, Cora Strittmatter, Serena Valeriani, Julia Wunderle, Veronika Wunderle.

Direct links to the newspapers.
http://www.badische-zeitung.de/wehr/kraeftig-weihrauchfass-schwingen

Posted by Kripa Foundation at 2:10 AM 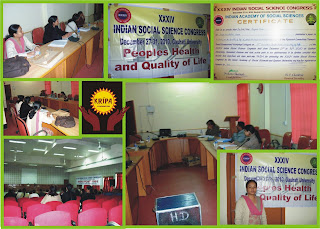 Double click image for larger view
At the XXXIV Indian Social Science Congress held at Gauhati University- Guwahati from 27th to 31st Decemeber-2010, Ms. Jagrata Bora of Kripa Guwahati presented a research paper on the study of quality of life of People Living with HIV/AIDS in Kamrup district of Assam under the Thematic Panel “People’s Health and Quality of Life"

Submitted by
Mozen H
Posted by Kripa Foundation at 10:46 PM

A visit by Fr. Joe's yoga students from Brazil to Kripa Bandra, Mumbai. 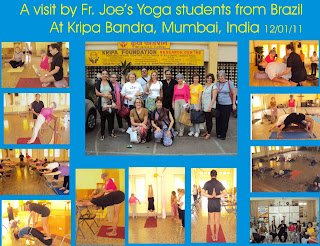 Double click image for larger view
11 yoga students of Fr. Joe from Brazil visited Kripa Bandra, Mumbai. The students practiced their yoga asanas, after which they visited the centre.
Newsdesk.
Posted by Kripa Foundation at 1:35 AM 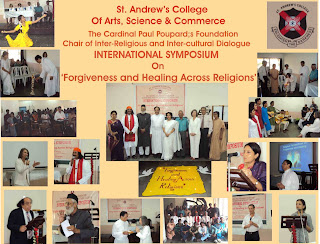 Double click image for larger view
A one day International symposium on "Forgiveness and Healing across Religions'' was held at St. Andrew's College Bandra, Mumbai. The program started with the traditional lighting of the lamp by Chief Guest Fr.Joe H Pereira- Founder Managing Trustee of Kripa Foundation, Mrs. Kia Scherr - President of One life Alliance and Guest of Honour, Dr Marie Fernandes- Principal of St. Andrews College, Mr A.D Mascarenhas- Dean of the college, Mr Johnny Alves, College Administrator and a student representative.
The key speakers were Fr. Joe H Pereira, Mr. Mohammad Shoaib Koti, General Secretary- All India Tehreek -e-Zakaat, Sadguru Mangeshda- Founder of Kriya Yoga Foundation, Mrs. Kia Scherr, Rabbi Solomon Sopher- President of Baghdadi Jewish Community in Mumbai & Ms. Mona Gaur of the Bahai Community.
The audience were touched by the personal sharing of Mrs. Kia Scherr on the loss of her husband and daughter in the terrorist attack on Tridentt Hotel, Mumbai. Questions from the students were answered by Fr Joe Pereira, Sadguru Mangeshda and Rabbi Solomon Sopher. Fr. Joe summed up this session, by stating that it was easier to forgive, but reconciliation was more difficult.
The whole program was well organised under the Professor in charge of the event Mrs. Sharmila Dhote, the students organising committee. Sister Teresa Joseph all under the leadership of Dr. Marie Fernandes. Mr Michael O Toole a guest of Kripa from Australia also shared his story, relating with context to the topic. The master of ceremonies was a student of the college Johanan Nunes.
The program ended with the singing of the National Anthem. The students went home enlightened, by the speakers words of Wisdom, keeping in mind to utilise them not just academically, but in their personal lives too, as they would be the future torch bearers of our country.
Those wishing to get an extract of the copy of Fr Joe's presentation, may kindly contact :
Ms Krishna Iyer
Development Manager
Kripa Foundation
krishna.iyer@ymail.com
Newsdesk
Posted by Kripa Foundation at 5:14 AM 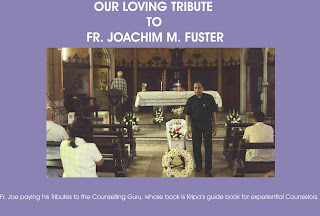 Posted by Kripa Foundation at 5:27 AM 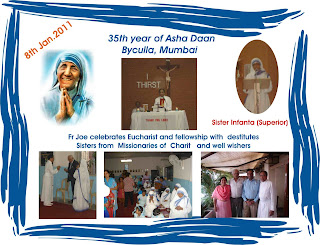 Posted by Kripa Foundation at 5:23 AM 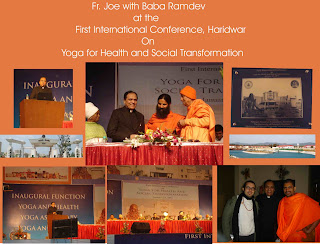 Fr. Joe was invited as a guest speaker and aa a internationally renowned Yogic, to deliver a presentation on "Yoga and Society",Yoga and "Addiction and Yoga" for the "Practice of Christian Meditation' at the First International Conference on Yoga for Health and Social Transformation, January 2-5, 2011. Haridwar, India.

Present at ths conference were Mahashri's, Guru's and Yogics from the Himalayas to Harvard Medical School and delegates from all over the world. His presentation at the conference was well applauded and many extended an invitaion to him to visit their centres.

Posted by Kripa Foundation at 1:13 AM 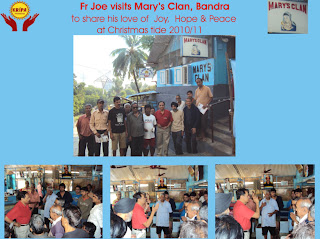 Fr. Joe visited the centre of Mary's Clan, a home and rehab for addicts, in Bandra, Mumbai. During his visit as Kripa Mangaing Trustee and a Class A Trustee ( non alcoholic) of Alcoholic Anonymous-G.S.O.India he inter-acted, and gave the message of recovery, especially during the festive season of Christmas. He also shared pleasantries with Bosco Pereira, Director of Mary's Clan via a telephonic conversation.He concluded his visit with an interfaith prayer session and blessing those present for Christmas, Happy New Year 2011, and a life of sobriety- One Day at a Time.

Posted by Kripa Foundation at 11:19 PM 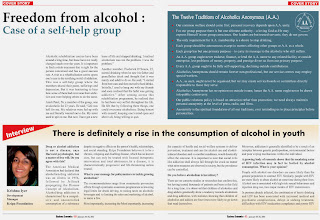 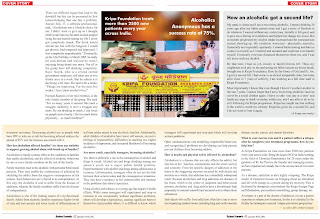 Posted by Kripa Foundation at 8:47 PM