Fr. Joe Blesses the Wedding of Rachel and Karan in Jhodpur 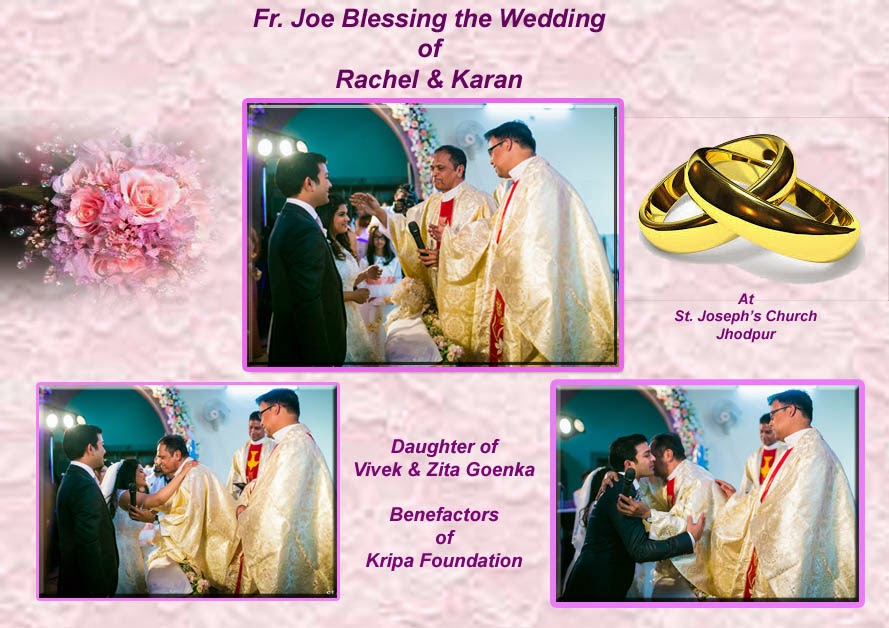 Submitted and Collage by
Newsdesk
Posted by Kripa Foundation at 10:49 AM

Fr. Joe - Guest of Honor at a Cycle Rally on World Environment Day 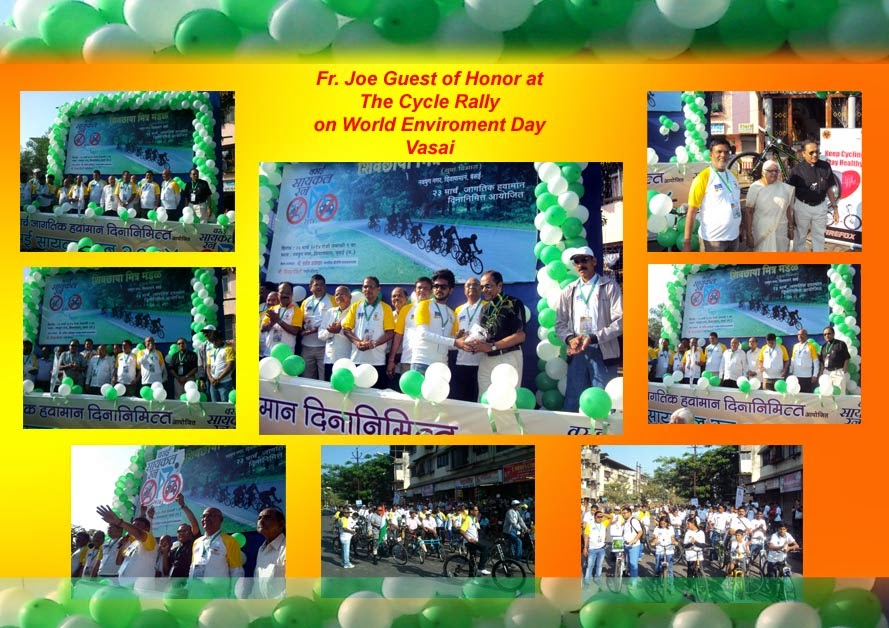 After the marathon speaking at the AA night vigil at Saki Naka Mumbai, Fr. Joe rushed early morning to Vasai to attend a cycle rally where he was the Guest of Honor. This rally organised by Sai Seva Youth leader Siddesh Jadhav was held  to create an awareness among the people to save the Earth of it's flora and fauna.  Fr. Joe accompanied by the Mayor of Vasai- Virar  Shri Narayan Mankar with a host of dignitaries flagged off the 11 kms. rally which had participants who were Physically   challenged , Senior citizens , Women and Children. Mr. Sandesh Jadhav who is also the President of Janata Bank and a prominent Social crusader always helping those in need,mentioned that looking at the response it is indeed joyful to see people really caring to save their planet ,and the coming years will see bigger rallies of awareness. Fr. Joe was felicitated with a Memento and a tree sapling
Submitted and collage
Newsdesk
Posted by Kripa Foundation at 6:21 AM

Fr. Joe speaks all night long to AA members at a night vigil in Mumbai 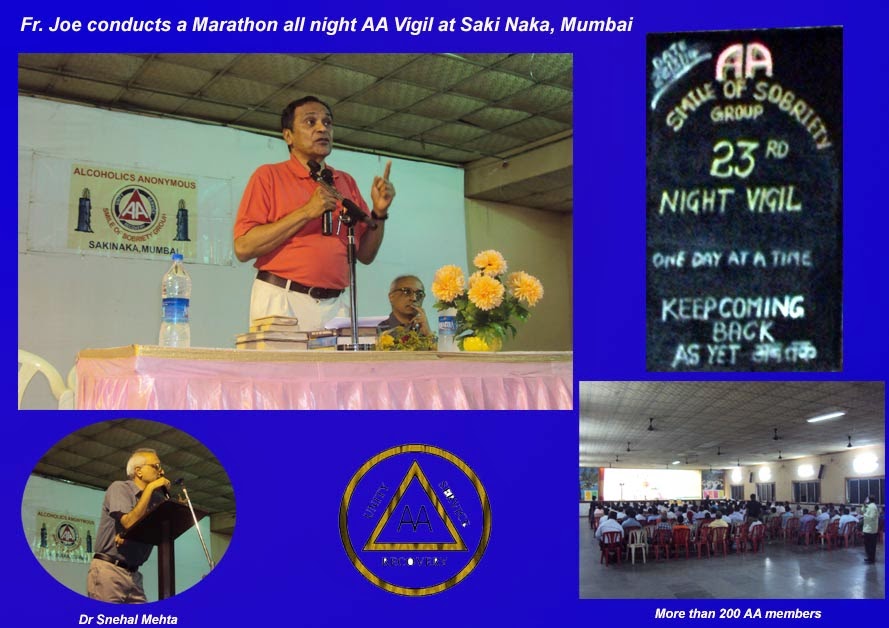 On Saturday 22nd of March 2014, Fr. Joe created a unique record of conducting a night vigil for members from all over Mumbai, Thane and even as far flung Raigad district. The AA members who numbered more than 200 sat in apt attention listening to Fr. Joe, a Class A Trustee of Alcoholic Anonymous ( Non Alcoholic) and Founder Managing Trustee of Kripa Foundation speak on various topics related namely on UNITY, SERVICE and RECOVERY. Dr. Snehal Mehta a leading Psychiatrist of Mumbai, spoke on the disease aspect with  psychiatric views. Bhaskar of Smile of AA group, Saki Naka, Mumbai, where the night vigil was conducted, thanked Fr. Joe and his team for enlightening them and helping a recovery see a better sobriety lifestyle.
Submitted and collage
Newsdesk

Posted by Kripa Foundation at 6:10 AM 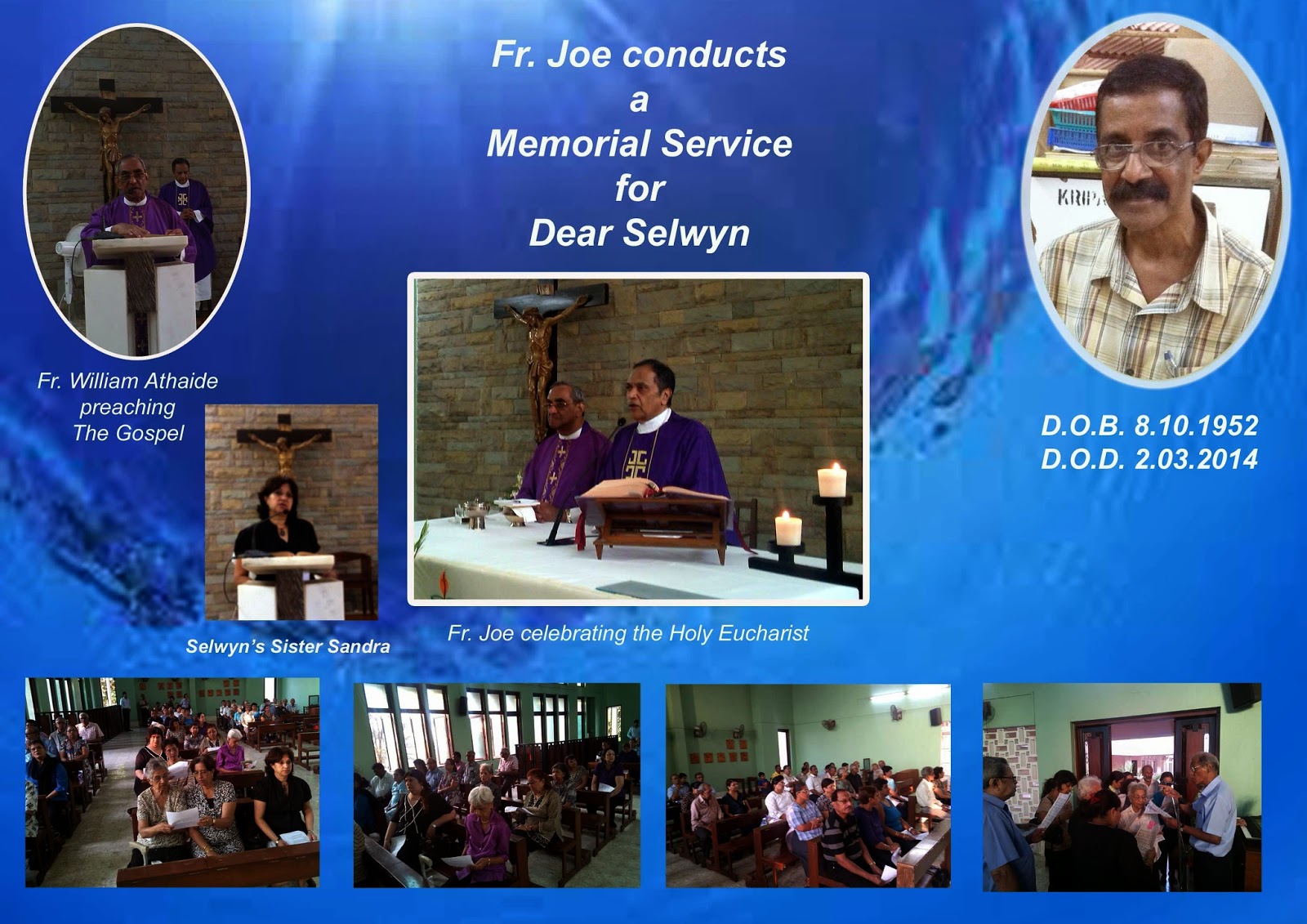 "One should have a HEART OF GOD" said Fr. Joe in his homily at the memorial service held for late Selwyn Rebello who went to his eternal abode on the 2.3.2014. Fr. Joe added by saying " Selwyn was a man who gave his love for others by doing his best for others that came his way." a touching tribute that moved all who attended the service at Prathanalaya , Bandra Mumbai. The service was well attended by his relative , well wishers and Kripa family members. Accompanying Fr. Joe in con-celebrating was Fr. William Athaide, Parish Priest of Mount Carmel Church.
Submitted and Collage by
Newsdesk
Posted by Kripa Foundation at 5:44 AM 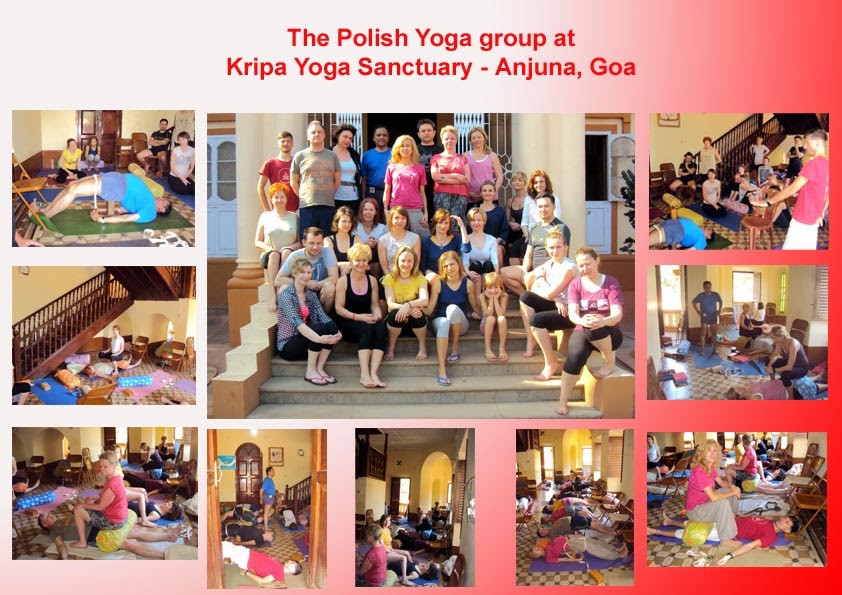 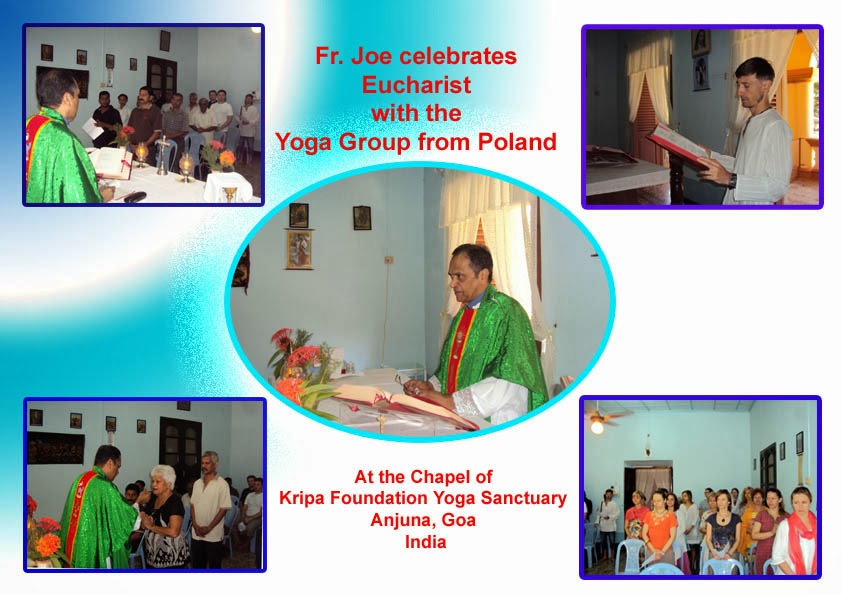 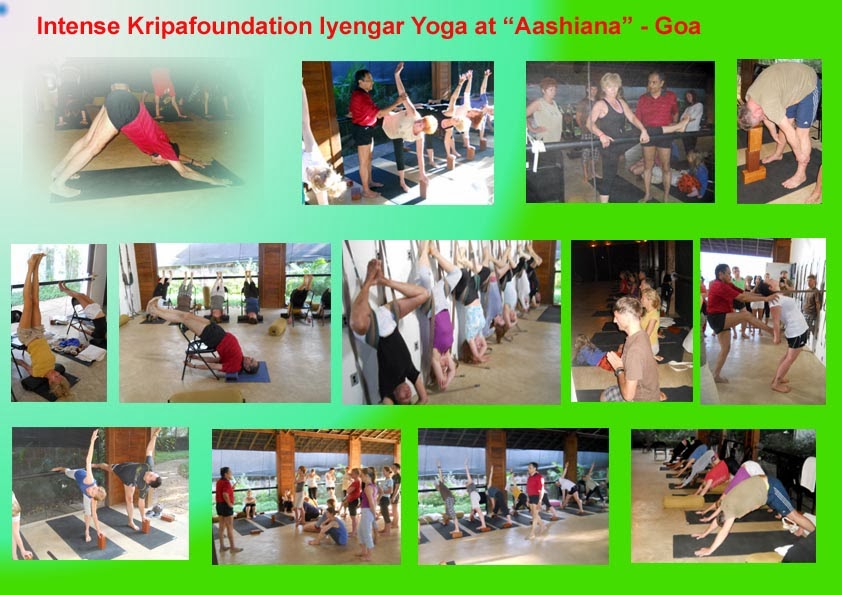 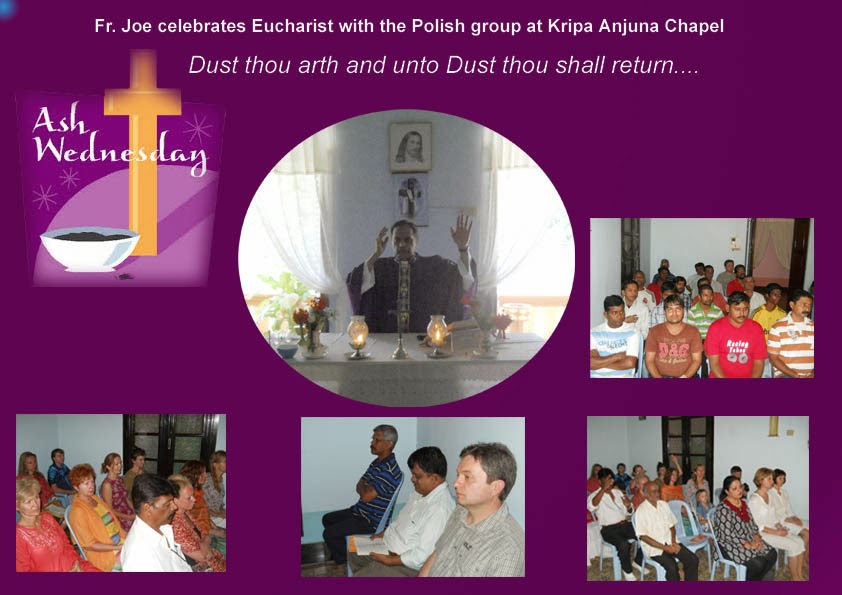 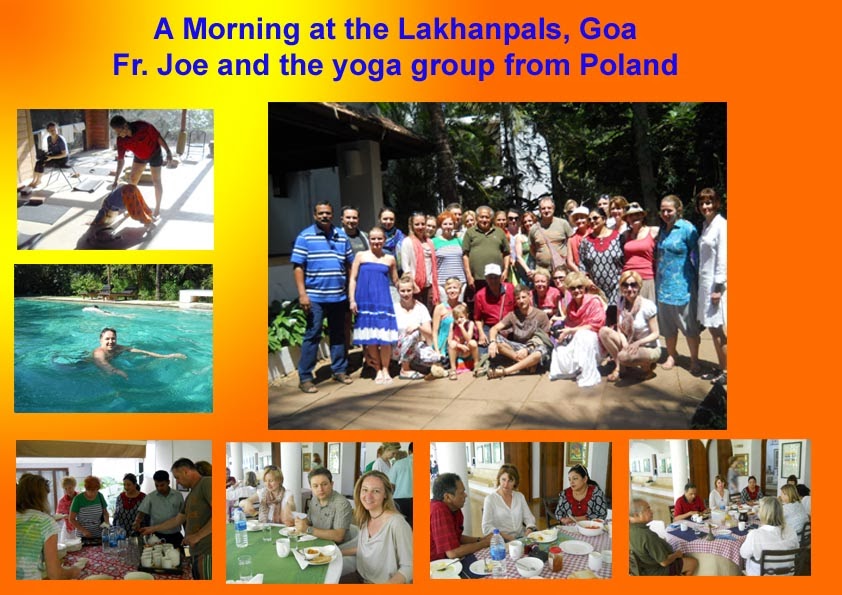 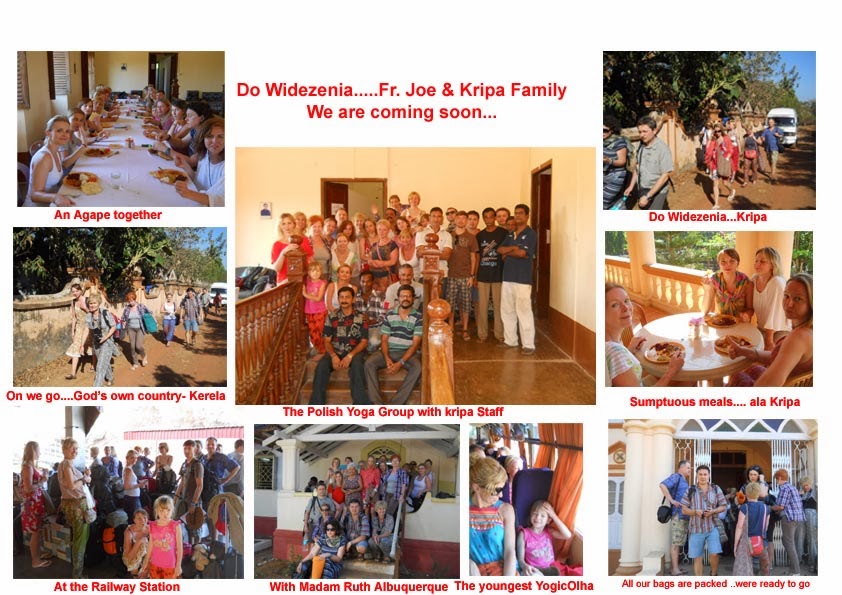 A Letter of Gratitude from Pauline & Paul
Polish Yoga Group Leader.
Namaste Yoga Wroclaw, Poland
Namaste Yoga School from Wroclaw in Poland was founded in 2000 by Paulina Stroz. She is an Iyengar yoga teacher with over 18 years of experience as a yoga practitioner & more than 13 years of yoga teaching experience, holding the certificate of Iyengar Yoga Institute in Pune, currently Junior Intermediate II.
Our school is located in the city of Wroclaw in South-West Poland, formerly know as Breslau. We run yoga classes on a daily basis as well as organize weekend events and workshops in various destinations all across Poland and in Europe , as well as in India. We come to India every year in March with a group of Polish students for both yoga practice as well as to do some sightseeing. We have already visited Pune, Mumbai, Goa, Kerala, Delhi & Dharamsala. This year we brought a group of 25 people for a workshop with Father Joe, including our little 6-year old daughter Aleksandra - Ola in short ;-)
We met Fr. Joe Pereira last year in June in the workshop he did in Katowice where he had been invited by the Polish group of The World Community For Christian Meditation, of which he is also a member and the national coordinator for India. During that workshop we invited him to come again to Poland for another workshop at our school in the city of Wroclaw. We explained to him then how much Poland needed his frequent presence, both the Iyengar yoga practitioners as well as Polish Christians and Catholics practicing yoga who are faced with huge resistance & even hostility from Catholic Church leaders in Poland.
We felt he himself was the answer to all our questions, doubts and struggle as he was two in one: a Catholic priest and an advanced long time yoga teacher, one of the closest students of Guruji B.K.S. Iyengar as well as close friend of Archbishop of Mumbai Cardinal Oswald Gracious. Father Joe had decided to pay another visit to our country and we had the privilege and honour to host him in October 2014 for a 4-day national convention at Namaste Yoga in Wroclaw.  Father Joe will be coming to Wroclaw, Poland in May this year for another national workshop to bring.
Thank you Father!
Thank you Bosco!
Thank you all team at Kripa Foundation!
Paul, Paulina, Ola and all Polish Yoga Group.
1st - 6th March 2014.
Collage By
Newsdesk

Posted by Kripa Foundation at 6:44 AM