Fr. Joe says a need for QUANTUM CHANGE- " A ROAR OF AWAKENING 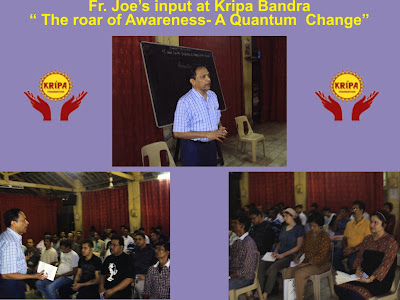 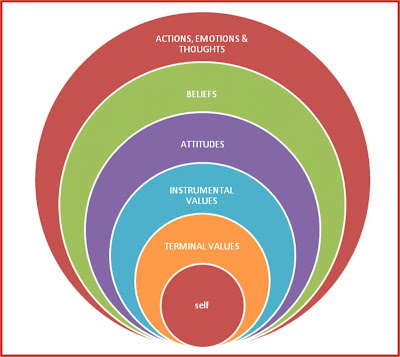 Extract of the input given at Kripa Bandra on 31/1/2012
Fr. Joe took an input session on the ultimate change called the quantum change, the total transformation of the self, the conversion through the quantum energy. He also mentioned that even after recover in many there is only “no alcohol” yet the ultimate transformation is absent. Hence he urged the clients to go through the process of analyzing the mystery of transformation.
He explained that a person in this world suffers with lot of discrepancies and conflicts in life. There is a clash between the real self and ideal self, what we want to be and what we are doing actually do not match. And realization of this conflict opens the portals of ultimate change.
While uncovering the real self ,one sees that the self is made up of Terminal values, the core values of a being, such as need for personal comfort (which includes pleasure too), peace (both inner and outer), freedom, understanding God’s will (so as to know why one has come to exist in this world. These core values define one’s instrumental values, those values by which we operate in this world, which includes our ambitions, our realm of freedom and forgiveness, our obedience and contentment with ourselves.
These instrumental values in turn define our attitudes, beliefs and emotions. And thus is made “self”. But when our core values clash with our behavior, our overt actions, we face a conflict, a discrepancy, hence becoming uneasy, restless in life. Thus, one gets on the “rock bottom” of life and this leads to the total conversion. The realization comes through an “AHA” experience, the eureka of this operation!!
Thus, there comes the congruence between the idea self and the real self and the human being is complete. A transformed human being is the one who is in touch with his real self and is aware of the essence & the purpose of his existence.
Father Joe explained the ways to discover this path of transformation and to hold on to it for good. He emphasized that one needs to explore his subconscious and unconscious because everything in one’s life has its roots & rituals. One who is able to explore his unconscious is able to know the “whys” of his behavior and actions.
He also drove home the fact that one has to learn to live in the present, the here and now of one’s life so that one makes the best of it instead of cribbing about the “by-gone” and worrying about the unknown future.
He emphasized on striking a balance between the “science and faith” and said that one who follows the rational thinking with faith has the potential for the quantum change.
Thus for everyone and for others in general, it is important to become this instrument of change, because, when one develops a positive self, the whole world becomes positive for him, as it is about giving that one receives, it is about dying that one lives…dying for everything…and living beyond anything.
Father Joe’s lecture was also backed by various stories and anecdotes about life which added the tinge of motivation and interest to it. The lecture also had a hue of various theories and philosophies which took the lecture beyond spirituality, beyond science….but above all A NEW TRANSFORMED LIFE. 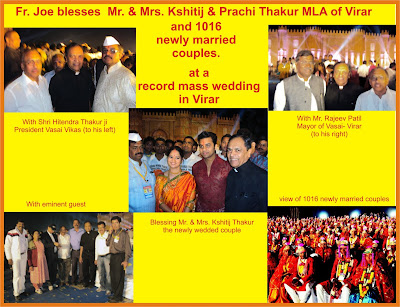 Double click image for larger view
Fr. Joe graced the wedding of Mr. & Mrs. Kshitij and Prachi Thakur (MLA) and son of the President of Vasai Vikas, Shri Hitendra Thakurji.
The wedding had a record of 1016 local couples who got married along with Mr Thakur. The couple was very pleased to see Fr. Joe and seeked his blessing to their newly married life. Fr. Joe also blessed the 1016 couples that consisted of Catholic, Muslim and Hindu by faith.
News Desk.
Posted by Kripa Foundation at 11:00 PM

Kripa mourns for 3 of its staff

Kripa bids farewell to three of its senior counsellors who left for their heavenly abode at the beginning of this New Year. May God grant them eternal rest.
Kindly view the tributes in the next three blogs below.
News Desk
Posted by Kripa Foundation at 10:32 PM 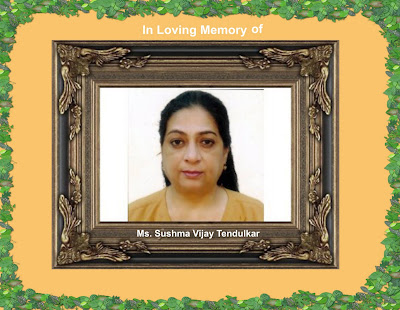 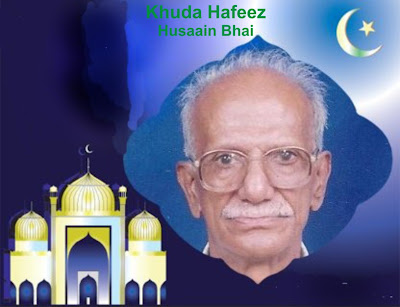 Hussain bhai, one of the oldest and popular member of the AA group in Mumbai and the seniormost counsellor of Kripa passed away on the eve of 31st December, 2011. As we celebrated the new year, the news of his death due to prolonged illness shook us all up. His very affable and jovial self had touched the lives of thousands of recovering alcoholics and their families over the years. He demonstrated the energy of a young soul not just in his approach towards life but also the regular activities he involved himself to spread the message of Kripa Foundation and the AA fellowship in the society.He famous words were " Sobriety is like a wrestler with a well oiled body difficult to maintain at times, but not impossible to stay sober". He always was in gratitude to Fr. Joe for all the good that Fr. Joe had done for him.The most touching farewell to Hussain Bhai was to see Fr. Joe pray with three other Muslim clerics at his funeral. At any instance he would promptly and proudly tell you the number of years, months, days that he has been sober, and as he breathed his last he proudly held on to his biggest achievement, his sobriety,even a few hours before he passed away, he was helping some into recovery. 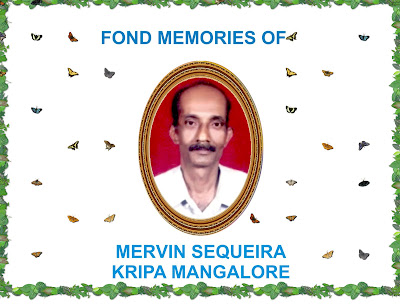 Mr. Mervin Sequeira a senor counselor with Kripa Mangalore expired after a prolonged illness on the 14th of January 2012. He was well respected by clients in his counselling skills to patients with his soft spokeness and kindness. Mervin was liked by one and all. Even during his treatment at Mumbai he was taken care of with much love and concern for him. It was a joy to see him dance away to his heart content at Fr. Joe's birthday, even though he was very ill. He is survived by his wife Irene and daughter Mariam.
Submitted by Paul D'Souza
Managlore
Posted by Kripa Foundation at 10:24 PM 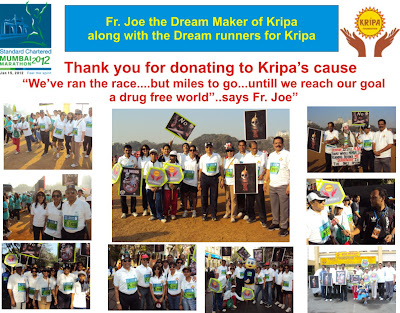 Double click image for larger view
Posted by Kripa Foundation at 3:52 AM

WE REGRET TO ANNOUNCE THE SAD DEMISE OF MR. MERVYN SEQUEIRA, SENIOR COUNSELOR OF KRIPA MANGALORE ON THE 14TH JANUARY. FUNERAL ON 15TH JANUARY AT VALENCIA CHURCH, MANGALORE AT 4.00PM
MAY HIS SOUL REST IN PEACE -AMEN.
FR. JOE & THE KRIPA FAMILY
Posted by Kripa Foundation at 3:26 PM 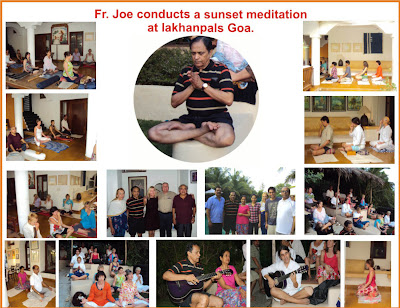 A visit by Fr. Joe and the yoga group to Mr. & Mrs. Haroon & Rehana Ebrahim's home- Kripa's benfactors in Goa 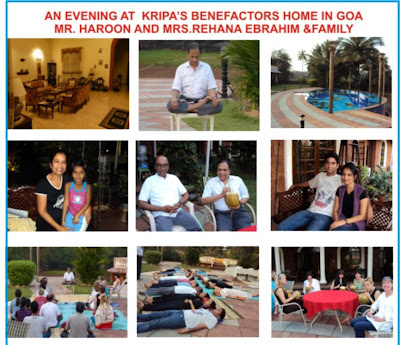 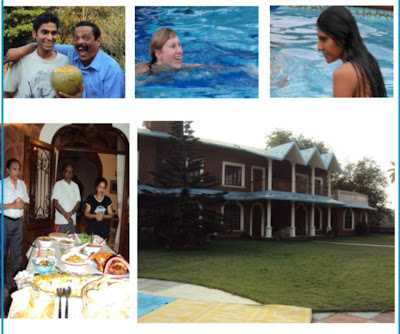 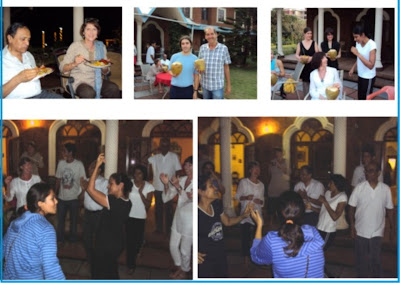 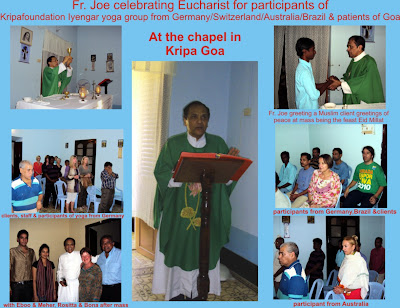 Double click image for larger view
Fr. Joe celebrates mass daily in the chapel of kripa Goa, along with yoga workshop participants from Germany, Switzerland, Australia, Brazil, staff, clients and friends of kripa. Many in the congregation our people of different faith. A heart rendering experience was to witness Fr. Joe call upon a Muslim by faith and share the prayer of Peace on the ocassion of the feast of Eid Millat.At the end of the mass, the recessional hymn was sung by Fr. Joe in German and Konkani languages.
View the clip live by clicking the link below
http://youtu.be/ctLuOGobeEs
News Desk.


Posted by Kripa Foundation at 7:19 PM 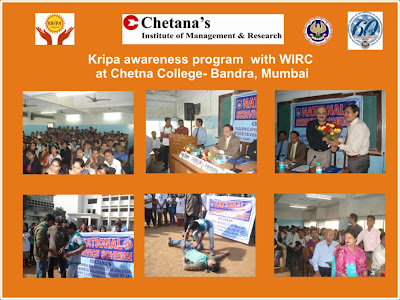 An awareness program on Addiction was conducted at Chetna college, Bandra (E), Mumbai for about 300 students.The program consisted of a testimony by a client of Kripa,orientation of the disease by staff of Kripa Kirk Albuquerque and a skit based on addiction was held on the play grounds of the college, much witnessed by many students.
Present at the outreach were the Principal of the college Mr. Pravin Devasthali, CA Shrinivas Joshi- Chairman of WIRCA, CA Shardul Shah WIRCA, staff of Kripa Bandra Simon Mathew and Laxmi Rani Shah.
Newsletters of Kripa were distributed to all present at the function. The students appreciated the outreach program. 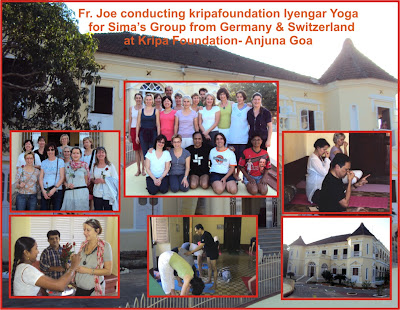 Double click Image for larger view
A Kripafoundation yoga workshop is being conducted by Fr. Joe from 8th - 14 Jan at Kripa Anjuna Goa. The staff of Kripa Goa welcomed the guest from Germany & Switzerland by having an Aarti and presenting a rose to each participant.
News Desk
Posted by Kripa Foundation at 7:25 PM

A Treat for the boys of at Kripa Bandra 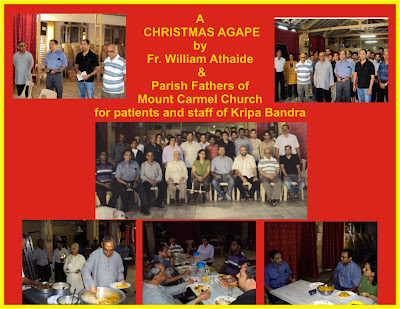 A sumptious lunch was gifted to the staff and patients of Kripa Bandra by Fr. William Athaide the Parish Priest and the parish Fathers of Mount Carmel Church, Bandra. Fr. Joe in his address thanked Fr. William for his love agape and stated that he was very touched by the Parish fathers love and affection to the patients and staff of kripa Bandra extended throughout the whole year. Present at the lunch gathering was Fr. Byron, Fr Alvaro, Fr. Rego, Fr. Leslie and Mrs. Christine Namory. A pleasant surprise was a visit by Charmiane and Glen children of Late Harry D founder of AA in India, along with Chairman of GSO India Mr. Bhalla . The patients were very touched to see Fr. William, Fr. Joe and the parish fathers eat along with them.

News Desk
Posted by Kripa Foundation at 3:45 AM