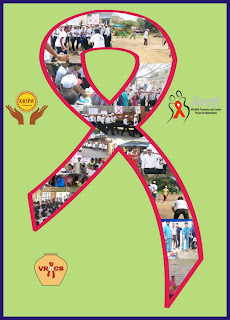 In commemoration of World AIDS Day, Vasai Region AIDS Control Society (VRACS) conducted a series of events from 01st to 03rd December, 2010, supported by Kotak Education Trust and Municipal Corporation of Vasai-Virar.
On 1st December, four rallies were organized, with around 4800 students from 44 schools in different parts of Vasai-Virar and a street play on HIV AIDS & its related topics.

On 2nd December, two awareness stalls were held in different parts of Vasai wherein there was a question-answer session, game show, poster exhibition, distribution of pamphlets.

On 3rd December, a rally and a cricket match was organized for around 60 migrants of the industrial area of Vasai.
Posted by Kripa Foundation at 9:12 PM