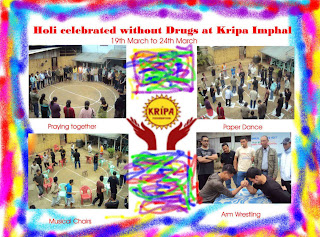 Holi Festival One of the major festivals of India, Holi is celebrated with enthusiasm and gaiety on the full moon day in the month of Phalgun which is the month of March as per the Gregorian calendar. Holi festival may be celebrated with various names and people of different states might be following different traditions. people light a bonfire, called Holika on the eve of Holi festival and celebrate the victory of good over evil and also the triumph of devotion to god. Children take special delight in the tradition and this has another legend attached to it But, what makes Holi so unique and special is the spirit of it which remains the same throughout the country and even across the globe, wherever it is celebrated.
Holi at Kripa Imphal was celebrated in a grand way by organising "YAOSANG SPORTS MEET" with the theme SPORTS WITHOUT DRUGS. from 19th March to 24th March 2011. Various competitions in the field of Arm wrestling, Carom, & Chess were held. the highlight being fun games like Musical chairs, Blind hit, Paper dance & Spot dancing. The event was a grand success and ended on a joyful note.
Submitted by
Ms. Kshetrimayumi Jibanmala Devi
Kripa Imphal
Posted by Kripa Foundation at 3:02 AM