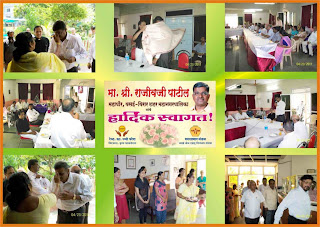 The Mayor was felicitated by Rev. Fr. Joe Pereira, Managing Trustee, Kripa Foundation amongst other members, in-house clients, staff of Vasai & VRACS and other prominent well wishers of Kripa from the Vasai area.

Fr. Joe briefed the Mayor about Kripa Foundation; its inception, the initiative of Kripa-AIDS; VRACS, and its activities.

The Mayor promised to extend a dual support to VRACS through the Corporation and through his being a member of the Board and also suggested to increase the quantum of activities in the migrant population areas of Vasai-Virar belt.

It was also decided that VRACS will support the Corporation in their activities like Health, Sanitation, Green Environment.
Submitted by
Mozen Heredia
Kripa Vasai
Posted by Kripa Foundation at 6:19 AM