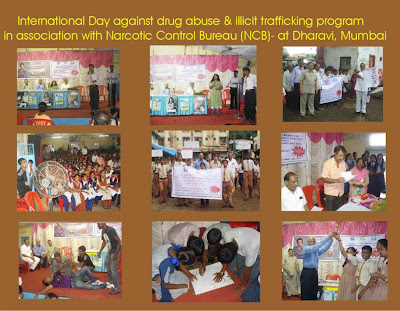 A program on International drug day abuse & illicit trafficking was held at Kripa Dharavi, Mumbai on the 26th of June 2011.The guest of Honors were Mr C. Fernande & Mr. S.Khan of NCB The local corporator Mrs.Mangala Vishnu Gaikwad & former corporator Mr. Vishnu Gaikwad.Dr.Sashi Menon, Director Internal Medicines,along with the staff and patients of Kripa Dharavi.
The program commenced with the lighting of the lamp by the guest of honors. after which, Mrs. M. Gaikwad in her address spoke on the effects of Drug addiction especially among youth. Mr. C Fernandes of NCB in his speech spoke about the work that Kripa was doing along with them, in reaching out through awareness programs to the citizens of India. Mr. Khan spoke about the ill effects of drugs and mentioned the latest rave party arrest in Khopoli, Maharashtra, where young girls and boys were trapped using drugs.
There was a slogan and spot quizz competition held for the students to which trophies and certificates were distributed to the winners.
Due to the heavy downpour of rain the program was held indoors, however the spirit of the children were not dampen and along with the guest of honors they walked in the rain through the narrow lanes of Dharavi shouting and displaying slogans on the bad effects of drug abuse, at the end of the rally the children were served soft drinks with refreshments.
It was a well organised program by the staff of Kripa Dharavi under the leadership of Deepak, Rajan,Praveen,Shabana and Salma, guided by Dr. Sashi Menon. The vote of thanks on behalf of Fr. Joe Pereira and Kripa Foundation was done by Rajan welingkar staff of Kripa Dharavi.