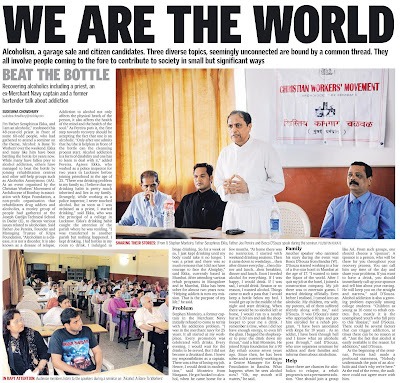 BEAT THE BOTTLE Alcoholism, a garage sale and citizen candidates. Three diverse topics, seemingly unconnected are bound by a common thread. They all involve people coming to the fore to contribute to society in small but significant ways

Recovering alcoholics including a priest, an ex- Merchant Navy captain and a former bartender talk about addiction

I’m Father Seraphinus Ekka, and I am an alcoholic,” confessed this 48- year- old priest in front of some 60- odd people, who had gathered to attend a seminar on the theme, ‘ Alcohol: A Bane To Workers’ over the weekend. Ekka and many like him have been battling the bottle for years now.

While many have fallen prey to alcohol addiction, others have managed to beat the bottle by joining rehabilitation centres and other self- help groups such as Alcoholics Anonymous ( AA).

At an event organised by the Christian Workers’ Movement of Archdiocese of Bombay in association with Kripa Foundation, a non- profit organisation that rehabilitates drug addicts and alcoholics, a motley group of people had gathered at the Joseph Cardijn Technical School in Dadar ( E), to discuss various issues related to alcoholism. Said Father Joe Pereira, Founder and Managing Trustee of Kripa Foundation, “ Alcoholism is a disease, it is not a disorder. It is also known as a disease of relapse.

Addiction to alcohol not only affects the physical heath of the person, it also affects the health of the mind and the health of the soul.” As Pereira puts it, the first step towards recovery should be accepting the fact that one is an alcoholic. “ Only after one admits that he/ she is helpless in front of the bottle can the cleansing process start. Alcohol addiction is a form of disability and one has to learn to deal with it,” added Pereira. Agrees Ekka, who worked as a police inspector for two years in Lucknow before joining priesthood at the age of 25. “ There was drinking problem in my family so, I believe that my drinking habit is pretty much inherited and lies in my family.

Strangely, while working as a police inspector, I never touched alcohol. But as soon as I was ordained as a priest, I started drinking,” said Ekka, who was the principal of a college in Lucknow. Ekka’s drinking habit caught the attention of the parish where he was residing. “ I was transferred to another parish but nothing happened. I kept drinking. I hid bottles in my room to drink. I indulged in binge drinking. So for a week or so, I just kept drinking until my body could take it no longer. I was a priest and there was so much remorse that I did not have courage to face the Almighty,” said Ekka, currently based in Mumbai. After attending various rehab programs in Mangalore and in Mumbai, Ekka has been sober for almost two years now.

“ Helping addicts is now my mission.

That is the purpose of my life,” he said.

Problem Stephen Monteiro, a former captain in the Merchant Navy initially refused to come to terms with his addiction problem. “ I was in the merchant navy for 25 years. It all started at my workplace.

Every promotion was celebrated with drinks. Every evening, I would wait for the drinks to be served. But I did not become a drunkard then. I knew my responsibilities as a captain.

There was a fear of losing my job.

Hence, I would drink in moderation,” said Monteiro from Mazgaon. He got hooked to alcohol, when he came home for a few months. “ At home there was no restriction. I started with weekend drinking sessions. Then it came down to weekdays… then after dinner everyday… then dinner and lunch… then breakfast, dinner and lunch. Soon I needed alcohol for everything. If I was happy, I would drink. If I was sad, I would drink. Reason or no reason, I wanted alcohol. Things came to such a pass that I would keep a bottle below my bed. I would get up in the middle of the night and start drinking. When there would be no alcohol left at home, I would run to a nearby bar at 5: 30 am and ask the shopkeeper to pour me a drink. I remember a time, when I did not have enough energy, to even lift the glass. I begged the shopkeeper to pour the drink down my throat,” said a frail Monteiro. He joined Kripa foundation for a 90 day rehab course seven years ago. Since then, he has been sober and is currently working as a Centre Manager for Kripa Foundation in Bandra. What happens when he sees alcohol now? “ Oh, my mouth still waters,” he said.

Family Another speaker who narrated his story during the event was Bosco D’Souza from Bandra ( W).

D’Souza started working in a bar of a five- star hotel in Mumbai at the age of 17. “ I wanted to taste the liquor of the world. After I quit my job at the hotel, I joined a construction company. My job there was to entertain guests. I started drinking officially. Even before I realised, I turned into an alcoholic. My children, my wife, my parents, all of them suffered silently along with me,” said D’Souza. It was D’Souza’s sister who approached Kripa and got him enrolled for a rehab program.

“ I have been associated with Kripa for 19 years . As an addict, I have been through hell and I know what an alcoholic goes through,” said D’Souza, who now organises seminars for addicts and their families and informs them about alcoholism.

Help Since there are chances for alcoholics to relapse, a rehab program is not a permanent solution.

“ One should join a group like AA. From such groups, one should choose a ‘ sponsor’. A sponsor is a person, who will be there for you throughout your recovery process. You can call him any time of the day and share your problems. If you want to have a drink, you should immediately call up your sponsor and tell him about your craving.

He will keep you on the straight and narrow,” said D’Souza.

Alcohol addiction is also a growing problem especially among college students. “ Children as young as 16 come to rehab centres.

But, mostly it is the unemployed youth who fall prey to this ‘ disease’,” said D’Souza.

There could be several factors that can trigger addiction, at times there can be no reason at all. “ Just the fact that alcohol is easily available is the reason for addiction,” said D’Souza.

At the beginning of the seminar, Pereira had made a profound statement, “ Nobody understands the pain of an alcoholic and that’s why we’re here.” At the end of the event, the audience could not agree more with him.