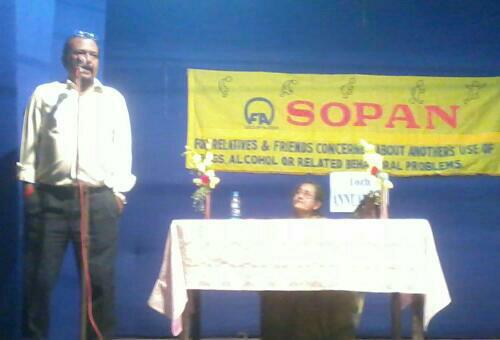 Al-Anon, known as Al-Anon Family Groups, is an international "fellowship of relatives and friends of alcoholics who share their experience, strength, and hope in order to solve their common problems." They "help families of alcoholics by practicing the Twelve steps, by welcoming and giving comfort to families of alcoholics, and by giving understanding and encouragement to the alcoholic."
Al-Anon was formed in 1951 by Anne B. and Lois W, wife of Alcoholics Anonymous (AA) co-founder Bill W. They recognized the need for such an organization as family members living with AA members began to identify their own pathologies associated with their family members' alcoholism.

Every Kripa centre has a similar family support system which reaches out to the families of those in Kripa recovery and meet once a week. Besides this the families are encouraged to go for meeting at Al Anon groups in the areas close to their homes. This year Sandeep Mitra of Kripa Kolkata was called as a guest speaker at the 16th Anniversary of  SOPAN NOR Al ANON group in kolkata. There was a gathering of more than 200 FA members.

Submitted
Newsdesk
Posted by Kripa Foundation at 4:19 AM