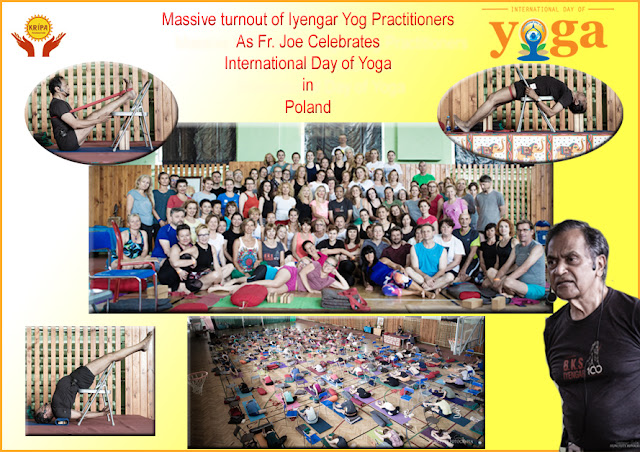 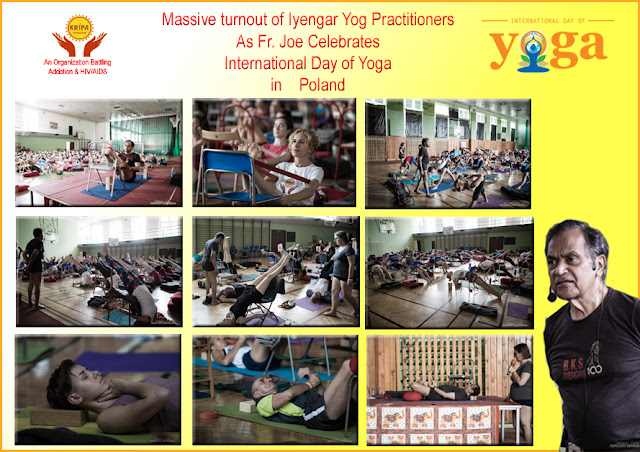 Mumbai to Poland: : the yoga of Fr. Pereira to fight drugs

by Nirmala Carvalho
The priest is a guest of honor at the International Wroclaw Yoga Day.  Friend of Saint Mother Teresa of Calcutta, he was a pupil of the master B.K.S.  Iyengar for 46 years.  His recovery method is widespread in 40 countries in North America, Europe and Asia.  "Body, mind, soul: yoga is a celebration of life".

Wroclaw (AsiaNews) - Yoga as a tool to recover from drug addiction: it is the idea behind an initiative that brought together 120 people in Wroclaw (Wrocław), in western Poland, for International Yoga Day 2019., the event will end tomorrow and was organized by the Polish Iyengar Yoga Association, which takes its name from the master BKS Iyengar.  "It is a unique event," said Fr.  Joe Pereira, guest of honor and founder of the Kripa Foundation, a Mumbai NGO that deals with the rehabilitation of drug addicts and AIDS patients.  Established in 1981, the association now has 76 projects, 26 centers in 11 Indian states and collaborations with various foreign countries.
Fr. Pereira was a student of B.K.S.  Iyengar for 46 years and has always believed that the use of yoga can be functional to the process of healing from drug addiction.  In 2016, on the occasion of the celebrations for the 25th anniversary of the Kripa Foundation, the teacher awarded the priest the recognition of the Kripafoundation Iyengar YogaTM brand.  The recovery method since then has spread to 40 countries in North America, Europe and Asia.
The priest first of all put the success of his NGO, down to his meeting with Saint Mother Teresa of Calcutta.  "The guiding philosophy - he says - is a reflection of the spirit of service and dedication, witnessed in the work of Mother Teresa, who personally blessed our centers in Calcutta and Vasai.  At the Kripa Foundation, Mother Teresa's blessing and philosophy are put into practice in the culture of giving and love.  Today the Foundation is the largest NGO in all of India ".
Fr. Pereira explains that the traditional 12-step program used by Alcoholics Anonymous, combined with the practice of yoga and Iyengar meditation, offers a holistic approach to healing.  "The 12-step program is the backbone of the recovery - he states - when you listen to your body, you begin to realize the truth about yourself.  Bringing people together and relating to the body through yoga gives the opportunity to deal with the disorder, because the physical has its own wisdom.  The Iyengar method determines a triple effect for change: body, breath and meditation.  All this can transform a person.  It is a mixture of body, mind and soul.  It is a celebration of life ".

With Gratitude to:
Nirmala Carvalho
Asianews

Posted by Kripa Foundation at 12:15 PM