" THE CIRCLE " A Film based on Fr. Joe's work "KRIPA" on street Children -WINS THE DELHI INTERNATIONAL FILM AWARD 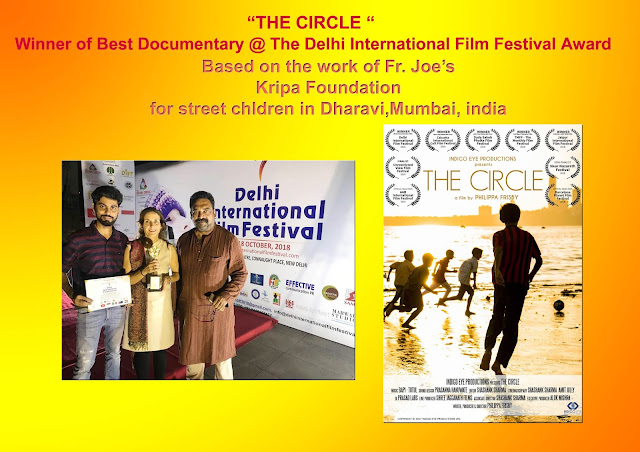 ‘The Circle’, a documentary film by Philippa Frisby on Iyengar yoga and de-addiction centre in Dharavi won the Best Documentary Film Award at the Delhi International Film Festival earlier this week on an auspicious 9th day of Navratri 18th Oct 2018 in the presence of a large audience including Ambassadors from 6 countries and many filmmakers from all around the world.
The film is based on the work of Father Joe Pereira an Indian Roman Catholic Priest, social worker and Senior Iyengar Yoga teacher and founder of Kripa the largest NGO addressing chemical dependency and addiction creating a unique way of working in this field through his work with BKS Iyengar and Mother Teresa.
“I always wanted to make a film on Iyengar yoga, and when I met Father Joe Pereira and saw the centre in Dharavi I knew this was the film I had to make. This is my first feature documentary film and I am overwhelmed by the response to The Circle and how it has inspired people to think differently and opened their eyes to a problem  they did not know about. The Circle has been screened in 9 festivals since January and received 5 awards. When I started out on making this film it was through my passion for filmmaking and yoga and making a social documentary I had no idea this would happen. I really want to thank Father Joe  for trusting me to make this film and it is dedicated to all the children in the film who have fought drug addiction with the help of Iyengar Yoga and are now inspiring others and to Deepak, Rajan, Shabana and Praveen who tirelessly work everyday to bring these children off the streets and cut the cycle of addiction offering them a new pathway in life.
It is very beautiful that The Circle is being shown in the centenary year of the birth of BKS Iyengar and my heartfelt thanks and gratitude goes to my teacher Zubin Zarthoshtimanesh who has inspired me and guided me on the path of yoga.
I am fascinated by all the people that Guruji has touched in the furthest corners of the world. Guruji’s pupils have become teachers and through their individuality, interpreted his teachings and taken it out into the world, like Father Joe using his work with Mother Teresa and Guruji. This work is affecting these children, who are often seen as anonymous, a nameless, faceless class at the bottom of society. This is what I saw in the street project in Dharavi and I shall be forever moved by its story of bravery, endurance and trust of all involved." - Philippa Frisby
Assoc. Director Shashank said: “ Film is a very powerful  medium and we are very thankful to everybody who has supported The Circle on its journey and all the festivals who have shown it and for the special screening at ICAAD. We are overwhelmed by the response it has received so far and the many things people have said. I thank all the people and the crew who worked on this film to make it a success  We will continue to work to spread awareness through our film The Circle and the more social documentaries made by IndigoEye Productions.