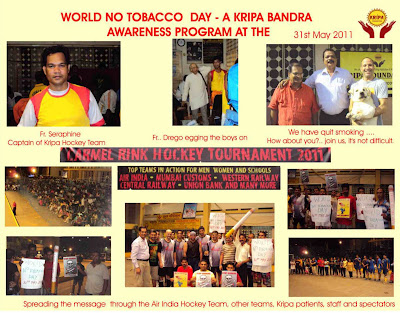 Double click image for larger view
Kripa Foundation Bandra organised an awareness progam at the recently held Rink Hockey Tournament, organised on it's turf by Mount Carmel's Church.Bandra, Mumbai.
A number of well known teams from across the country participated in this event, naming a few like Air-India, Central Railway, Union Bank and many local schools and clubs. Kripa Foundation also participated in the tournament., although we lost 10-2 against hockey giants Customs.Throughout the match the spectators and cheer leaders kept encouraging the Kripa team. Every game was played with a lot of zeal and sportsmanship.
To observe World No-Tobacco Day, Kripa Bandra, organised an Awareness Programme, on the ill-effects of smoking and the use of Tobacco at the tournament.
It was a great evening as the participating hockey teams supported the cause and joined by a huge crowd of spectators canvased for the campaign. Fr.Seraphine concluded the event with a brief talk on the bad effects of Tobacco use.
Reported by
Brett Rodricks
Kripa Bandra
Posted by Kripa Foundation at 8:32 AM