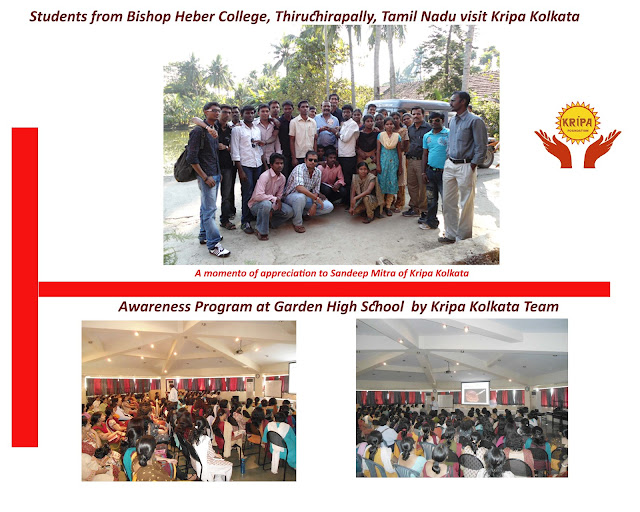 50 students of Bishop Heber College (Autonomous) from Thiruchirapally, visited Kripa Kolkata on an exposure visit, accompanied by two faculty members from the college.The three-hour awareness programme conducted by the  Kripa team, spoke about the changing scenarios of addiction, such as low cost designer drugs that are available easily outside educational facilities, subterfuge methods used by drug peddlers to trap unsuspecting students into deadly addiction, peer pressure from friends and class mates who are addicts and how to counter them, evil effects of drug and alcohol addiction on a the person, their families and the general society. They also discussed how modern day advertising and movies glamorize alcohol consumption and companies increasingly target the youth for their profits, regardless of the hazards they may face by consuming intoxicating beverages. Students and the Kripa team also held an interactive session to answer questions about addiction. The event concluded with the college presenting a memento to Dr. Sandeep Mitra, staff of Kripa Kolkata.


Nipping addiction in the bud: An initiative by Kripa Kolkata.

A group of 120 faculty members, including teachers, from the Garden High School, Kolkata, participated in a symposium held on the theme: ‘Addiction in schools, its menace and consequences’, conducted by Kripa Foundation Kolkata unit. The Kripa team enlightened those present about how to detect early signs of alcohol and drug addiction among students, and immediate measures that are required to ensure that such vices are nipped in the bud. The Kripa team said, it was vital for parents to ensure they have a healthy interaction with their children, especially during the pre-teen and teens days, since they are highly prone to fall prey to addictions at this tender age. The team pointed out that common medicines such as cough syrups, anti-histamines (anti-allergy pills and syrups), potent pain killers in tablet and injection forms and medications used against psychiatric illnesses and insomnia can be abused and misused by students, after procuring them illegally. They outlined some of the common symptoms by which teachers, faculty members and parents can learn if their child is hooked to drugs. In addition, the Kripa Team pointed out the menace posed by alcohol addiction, while lamenting that drinking had nowadays become an acceptable as a form of socializing and most parents were lenient while allowing their teenage children to consume such beverages and cocktails. The event also included a question-answer session between the faculty members and the Kripa Team.


Posted by Kripa Foundation at 6:33 AM