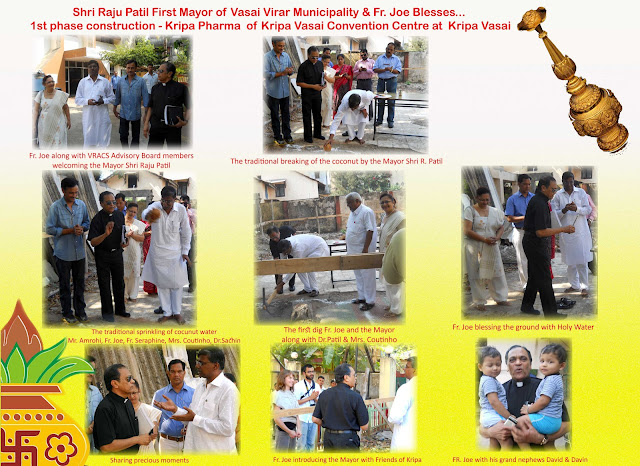 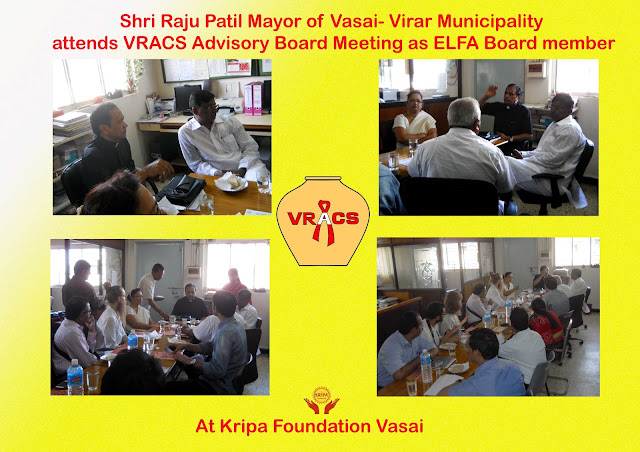 
The date, November 25, 2012, will remain a major landmark in Kripa Foundation’s 31 year history: On this Sunday, the blessing of the foundation’s latest project’s of Kripa Vasai Convention Centre (KVCC), was held at a multi-religious ceremony held at the construction site.


The Mayor of Vasai-Virar Municipality, Shri. Raju Patil, the first person to hold this post, participated in the traditional Hindu ritual of breaking a coconut and invoking prayers for a successful execution of the 1st Phase of Construction called “Kripa Pharma” of the KVCC project. Fr. Joseph H Pereira, Founder Trustee, Kripa, blessed the construction site by sprinkling Holy Water amongst chanting of Prayers.


Attendees, who included prominent personalities and medical professionals from the Vasai-Virar region, thanked Fr. Joe and Kripa for establishing VRACS, which they extolled as a unique endeavor aimed at spreading awareness, support and care  to prevent HIV/ AIDS contagion in the area. Fr. Joe noted that HIV/AIDS and substance addiction were a scourge of the modern society, especially in major metropolitan areas and concerted action between citizens and Kripa and this convention centre could play a vital role in educating people against these menaces.

Fr. Joe and the Mayor who is also a member of Elected Leaders Forum against AIDS (ELFA), discussed various means of mutual cooperation for this great work that Fr. Joe is doing and assured Fr. Joe and the Board of all required assistance and cooperation from the Mayoral office and the various municipal departments in the region of Vasai Taluka.

Posted by Kripa Foundation at 4:18 AM