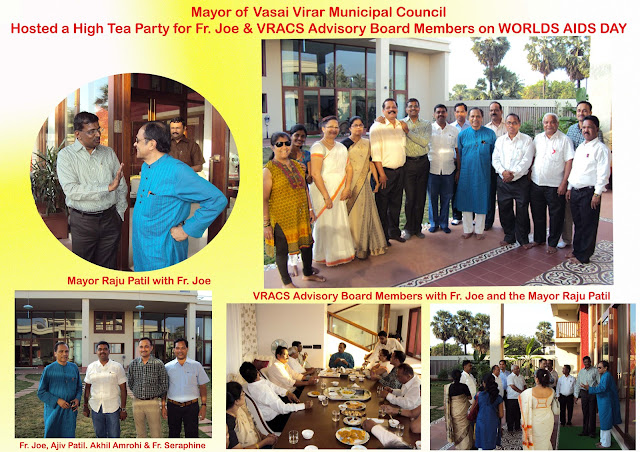 Double click image for larger view
The World AIDS Day is held annually on December 1, and provides an opportunity for people worldwide join forces in their battle against HIV/ AIDS. The day also marks support for people living with HIV while commemorating victims of this scourge. “The World AIDS Day was the first ever global health day and the first one was held in 1988..


Host to the function was Mrs. Patil the wife of  Mayor Patil and Mr. Ajiv Patil brother of the mayor. Mr. Ajiv Patil is  a sitting Municipal Councilor in Virar.


Speaking on the occasion, Fr. Joe mentioned that eradicating HIV and AIDS is yet to be achieved scientifically. However, these infections can be prevented by leading a mentally, physically and spiritually healthy life, which encourages people to shun drugs and casual sexual contact. VRACS, a division of Kripa is exerting extra efforts in the Vasai-Virar region to create a general awareness of HIV/ AIDS among all sections of the society. In addition, Kripa’s  centers across India have dedicated HIV/AIDS help-lines that can be accessed by the general public 24/7. He further added that most HIV patients carry a social stigma and are discriminated against by the society, which is a sad reality in India and abroad, However with the support of the Mayor and Elected Leaders Forum against AIDS (ELFA) and outreach done by VRACS it is far less in these areas of Vasai- Virar”. He assured all support by Kripa and VRACS to Mayor Patil and the people in his municipal region, to combat the dreaded disease.


Mayor Patil lauded the achievements of VRACS in his municipal precinct and urged Fr. Joe and his delegation to continue their efforts to ensure that the region nears to the zero mark of HIV/AIDS. Pledging full support for his work towards mankind.
Submitted
Ashwin Honawar
Collage
Newsdesk
Posted by Kripa Foundation at 4:38 AM