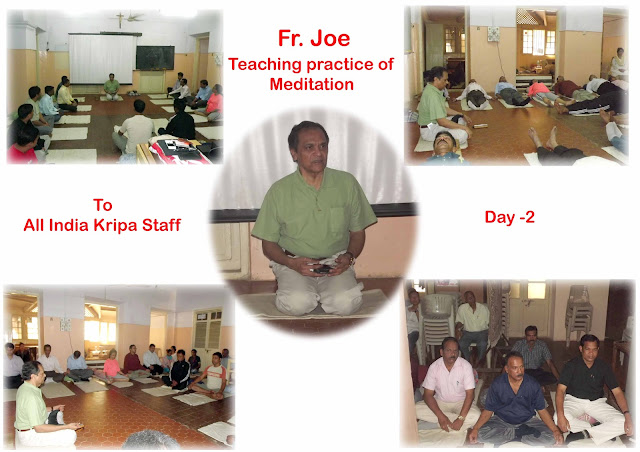 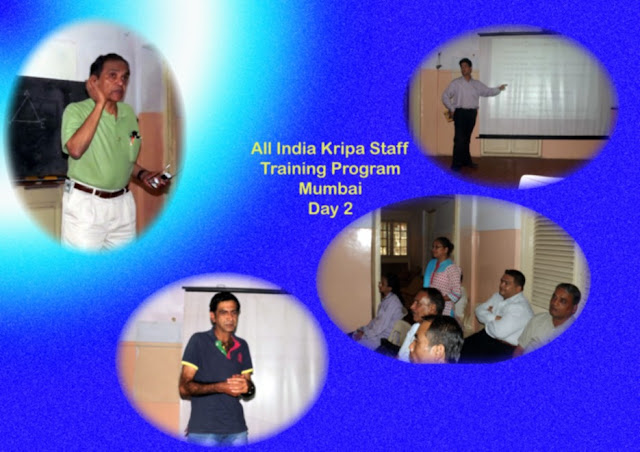 Double click image for larger view
Wellbeing and fitness can be achieved at home too, says Fr. Joe
Yoga is being widely recognized worldwide as a panacea for major disease including cardiac ailments and cancer, while meditation with synchronized breathing and single word prayer helps curb addictive behavior to promote mental well being by transfer of active thought process to passive restfulness, Fr. Joseph H. Pereira, Founder Trustee, Kripa Foundation, said in Mumbai on December 18, 2012.
Leading meditation at the start of the second day of the annual ‘Kripa Model of Recovery: Training Program for Standardization’ workshop at the Diocesan Pastoral Centre in Bandra (West), Mumbai, Fr. Joe demonstrated how meditators can transfer their intelligence, including cravings for alcohol, food or carnal pleasures downwards through their brain and allow restfulness and tranquility to replace these. Speaking on Yoga as medical therapy, Fr. Joe cited the example of his father who, in early 1970s, was diagnosed with a severe cardiac ailment and asked to undergo expensive surgery abroad, that could possibly extend his life by a maximum of seven years. Fr. Joe, upon advise from his Yoga guru BKS Iyengar, worked out a Yoga regimen and forced his father to undergo it. Major cardiac consultants of the day were shocked to find that Fr. Joe’s dad had recovered completely from what was a life threatening cardiac ailment and went to live for some 18 years more, without any major health complications.
The second day of the conference included visual presentations and group discussions on a variety of topics including proper documentation of addicts, addiction and relationships, post discharge follow-up, the role of counselors, medical history and others. Presentations were given by Bosco D’Souza, National Program Director, Dr. Snehal Mehta, Director-Psychiatry, Krishna Iyer, Development Manager and Mozen Heredia, Head of Documentation.  Kripa’s. Centre heads, project managers and senior officials from Kripa Foundation’s network across are attending the four-day event.

Posted by Kripa Foundation at 7:54 AM