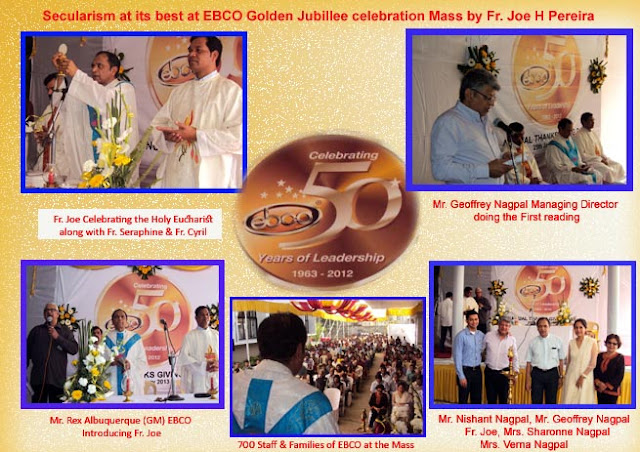 Ebco Pvt Ltd. A leading manufacturer of hardware and furniture fittings in India has combined two apparently opposite requirements of the customer. They have brought luxury and affordability together to make homes and offices havens of comfort and elegance. With their innovative, state-of-the art designs, Ebco has moved from customer satisfaction to customer delight. Anticipating the customers needs and exceeding their expectations has been a way of life at Ebco.
On the 25th of January, Ebco completed 50 years of leadership which was commemorated with a celebration at their Unit 1 in Vasai.
The celebration started with Holy Eucharist with main celebrant  Fr. Joe H Pereira Founder Managing Trustee of Kripa Foundation, who is a close associate of the Nagpal Family. Fr. Joe was accompanied by con-celebrants Fr. Seraphinus Tigga and Fr. Cyril D’Souza of Kripa Foundation.

On seeing that the congregation was mainly people of different faiths, Fr. Joe incorporated Sanskrit and references to the Koran and Bhagavat Gita, to make the mass more meaningful to them. In his homily Fr. Joe mentioned about new life. How one should live an ego free life in families, companies and society. Fr. Joe gave reference to how countries waste precious time by battling each other. He further mentioned how one should love one another and live in harmony. When one does so he said:  he is spared and gets the gift of  love, as God's love is unconditional to all. He gave the example of business, and mentioned EBCO, how a humble beginning 50 years ago and on the way over the years  the Nagpal’ have shared the fruit of their labour with all its staff and the huge gathering was witness of that love. Fr. Joe also gave an example of “WIN WIN Attitude “by Dr. Denis Waitley which the world business houses are following its teachings. But to do so one must have a conversion not from one religion to another, but with the two towers God within us and the divine control of God's spirit between us, that’s Faith. Once one believes that God dwells in our hearts, the ego comes under control. He ended his homily by saying, that on this great feast of conversion of St. Paul, all need to change and to do so we all have to be ready to change and for this we need the Blessing of God.

The congregation followed the mass with rapt attention and silence and even participated in the meditation after communion service. The people of other faith were given ”Prasad”. Later Fr. Seraphine went around blessing the premises with Holy Water.

After mass Fr. Joe rushed off as he had an appointment in Mumbai with the AA women's group from Australia at K.E.M. hospital auditorium. Mr. Geoffrey Nagpal and Family along with Mr. Rex Albuquerque General Manager, thanked Fr. Joe for bringing so much meaning into their 50th Jubilee celebration of their company.
Submitted and collage by
Newsdesk