Says Fr. Joe " Tell the Children of Vasai we Love to see a better tomorrow....and We Are Getting to Zero" 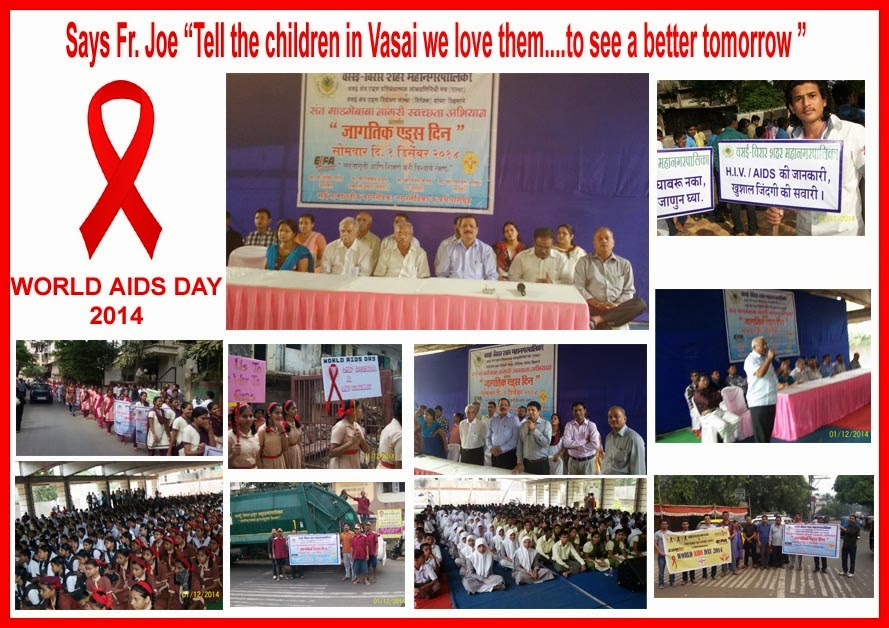 World AIDS Day, observed on 1st December every year, is dedicated to raising awareness of the AIDS pandemic caused by the spread of HIV infection, and mourning those who have died of the disease. Government and health officials, non-governmental organizations and individuals around the world observe the day, often with education on AIDS prevention and control.
World AIDS Day is one of the eight official global public health campaigns marked by the World Health Organization(WHO).

To commemorate the day, VRACS ( Vasai region AIDS control Society) a KRIPAIDS initiative,along with Vasai Virar Municipality organised a massive rally along with students of schools and colleges around Vasai. More than 800 students participated in the rally. The students carried banners and shouted slogans, as they all came from their respective schools in procession and gathered at New English High School. A well organised program headed by Dr. Hemant Patil of VVMC and Amit Patel of VRACS.
On the dais were Guest of honors Dr ( Mrs.) Anupama Rane, Mr. Arvind Karkanis, Mr.Mr. Bosco D'Souza, Mr. Santosh Walvikar, Mr. Jagdish Shetty, Mrs. Evette Coutinho, Dr Mali, and representatives of different schools.
The program started with an orientation by Dr Dr Rane on HIV , a brief speech by Mr, Karkanis, Mr. Walvikar and Dr. Patil. Mr. Bosco a representative for Fr. Joe mentioned in his speech, how Fr. Joe who could not be there due to a prior commitment in other World AIDS Day programmes in Mumbai sent his best greetings and love to the children of Vasai , further stating that with there support they could see a better tomorrow and make Getting to Zero a reality.
Three street plays on HIV/AIDS were enacted, after which led by Amit Patel the gathering took an oath  to fight HIV .

The students were all given refreshments with the kind support of VVMC. A gratitude to the staff of Vasai Virar Municipality, Staff of VRACS, Staff of Kripa Vasai and Principals and staff of schools for making the rally a grand success .

Posted by Kripa Foundation at 11:08 PM