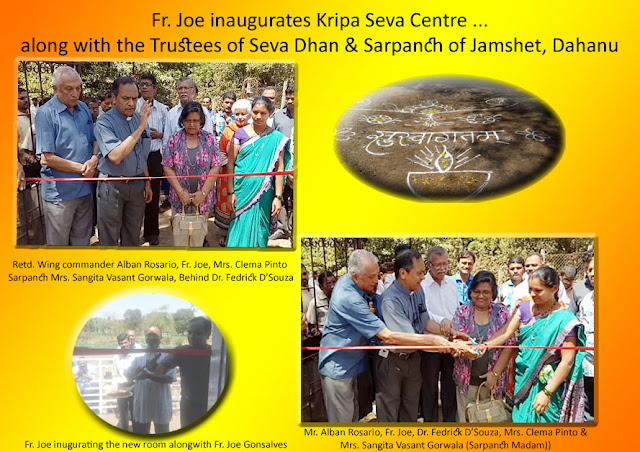 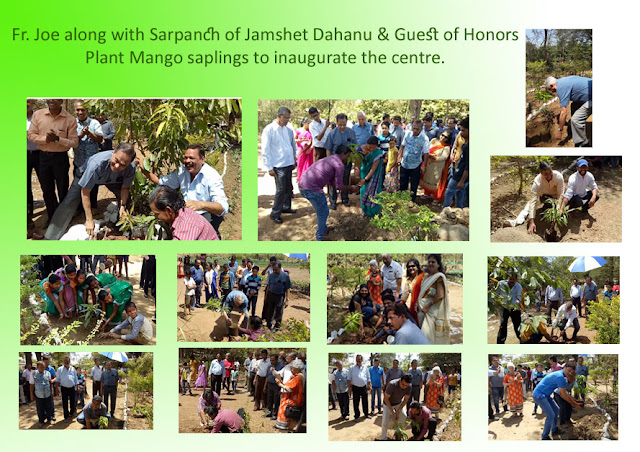 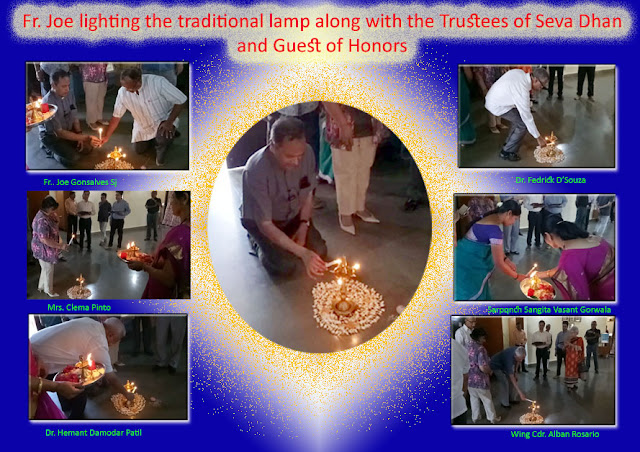 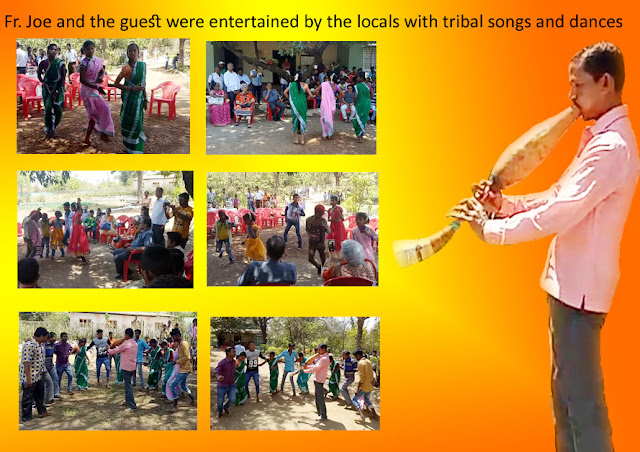 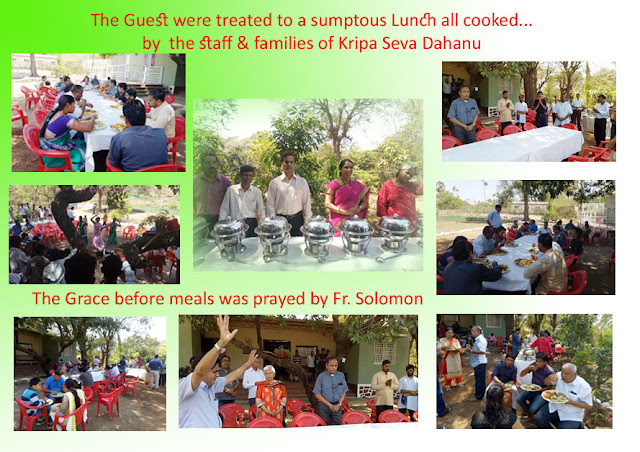 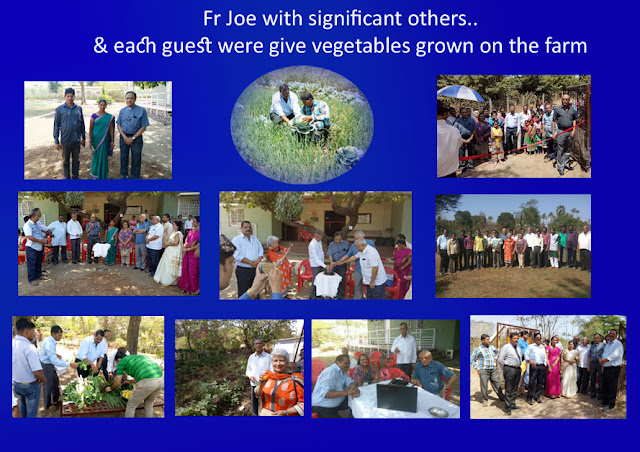 19th March 2017:
"We recycle men...."says Fr. Joe in his inaugural speech at the opening of the new centre in collaboration with Seva Dhan at Jamshet, Dahanu, Maharasthra. This centre will be called "Kripa Seva."
The inauguration was done along  with the Trustees of Kripa Seva, namely Mrs. Clema Pinto, Dr Fedrick D'Souza( who was accompanied by Mrs. D'Souza), Trustee  Retd Wing Commander Alban Rosario.excused was Trustee of Seva Mr. Joe Lobo due to his health.With the blessings of Archbishop Dr. Felix Machado, who could not be present due to prior appointments, but sent his heart filled greetings to Fr.Joe and Kripa Seva.

The Chief Guest was the Sarpanch of Jamshet Mrs. Sangeeta Vasant Gorwala, who was accompanied by her husband Corporator Mr. Vasant Gorwala, Mr Jude Pereira, Mr. Dominic Menezes, Police Inspector Ramesh Andher, VRACS Board members Jagdish Shetty, Mrs. Manisha Kanekar ,Dr. Vinod, Dr. (Mrs) Shubhangi Patil, Mr. Sharad Vichare,Mr. Aakil Amrohi & Family, Dr Bhakti, Dr Vinay,Ganesh Tarade and staff led by Mr. Amit Patel. In her speech the Sarpanch was so touched by the humbleness and genuine concern for the upliftment of the poor by Fr. Joe,that she assured all support towards the cause of kripa Foundation in her area of judiciary

The advisory board member of VRACS Dr. Hemant Patil stated that at Russell Dham (the name given by Fr. Joe to the building in memory of the founder of Seva Dhan Mr. Russel Pinto) would not only be for rehabilitation for addicts, but will also house doctors who will come from Vasai once a week to treat the local tribals for their medical needs. This got a big round of applause from the locals who had come in large numbers as there is a shortage of medical facilities in these areas.

After the traditional lighting of the lamp, Fr. Joe inaugurated the room that has been done for his visit at the centre and also blessed and placed a portrait of Saint Mother Teresa of Kolkata in the prayer room which was bought by Mr. Bruno Coelho along with a crucifix.. Earlier a statue of Our Lady of Mount was gifted by Bosco D'Souza's family.

The Guest were  entertained to some great music and tribal folk dances by children and youth of the village, this was choreographed by our staff Rajesh Gound a tribal himself. Everyone enjoyed  the hidden talents of these children.
Fr. Solomon accompanied by the Parish Priest of Ashagad Fr. Joe Gonsalves, Fr. Dominic, Fr. Jacob and Fr Yogesh prayed and recited  the Graced before meals, especially praying for the good health of Fr. Joe, who is reaching out into remote areas of the country, helping people live an addiction free life from substance abuse and HIV/AIDS care through yoga and the 12 steps program of AA, incorporated in the Kripa Model of Treatment. The guest were treated to a sumptuous lunch, specially cooked by the staff and family of kripa Dahanu.
In a big surprise to the guest all were given to take away vegetables that were grown on the farm of Kripa Seva Dahanu. This was a very touching gesture on behalf of Fr. Joe to all the guest who took some vegetables as they left for their journey back home.
Indeed it was a memorial day and people took along cherished memories of Kripa Seva Dahanu.
A special mention of gratitude to staff Vijay Mehta, Mohan Mehta and  Akshay Sawant, Ashley, Vasant, Elmer, Sanjay who have worked 24 x 7 to make things possible, Richard Bhenka, Wilson Fernandes, Rajesh Gound, Pravin Shinde, Mr. Linus Pinto, Fr. Seraphine Ekka, Mrs. Jean Pereira, Mrs. Alka Raut,  Bruno Coelho, Mozen Heredia, Shamit, Godwin,Ozwin,Khemchand, Mervyn Roccha, Oscar, Ashwin Fernandes, Joseph Saldanha, Suman Bhattacharjee, Suryakant, Terence,Mervyn, John, the patients of Kripa Dahanu and family members of staff especially Charmaine D'Souza, Mr. & Mrs Eknath and Aparna Eknath Sawant ( Parents of Akshay's), Stephen D'Souza and Antoinette D'Souza, Dr. Amol Gaikwad for extending his medical help to the in-house patients.

Collage by
Newsdesk
Posted by Kripa Foundation at 9:08 AM