AS Kripa Foundation completes 38 years in the field of Addiction Recovery on 15 this year, it has become a global presence in over 40 countries, and its teaching for the World Community for Christian Meditation has reached 120 countries. While the recovery rate has dropped according to the World Health Organisation, Kripa recoveries are showing a steady rise in maintaining sobriety.
First of all, one should know that addiction is a relapse-prone disease, and so one can learn from several relapses, and with the help of AA and NA, one can maintain a long term sobriety. Abstinence is the essential measurement of considering oneself as “recovered”. While this is a “NO-Cure” ailment. As per the fifth chapter of AA,” rarely have we seen a person fail who has thoroughly followed our path.” 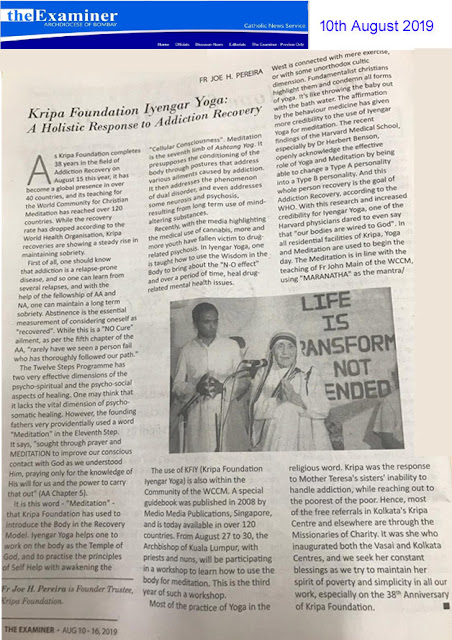 The Twelve Steps Programme has two very effective dimensions of psycho- spiritual and psycho- somatic aspects of healing. One may think that it lacks the vital dimension of psycho-somatic healing. However, te founding fathers very providentially used a word “Meditation” in the Eleventh Step. It says “sought through prayer and Meditation to improve our conscious contact with God as we understood Him, praying only for the knowledge of His will for us and the power to carry that out” ( AA Chapter 5).
It is this word “Meditation”- that Kripa Foundation has used to introduce the Body in the Recovery Model. Iyengar Yoga helps one to work on the body as the Temple God, and to practice the principles of Self Help with awakening the “Cellular Conscious” Meditation is the seventh limb of Ashtang Yog. it presupposes the conditioning of the body through postures that address various ailments caused by addiction. It then addresses th phenomenon of dual disorders, and even addresses some neurosis and psychosis, resulting from long term use of mind-altering substances.
Recently, with media highlighting the medical use of cannabis, more and more youth have fallen victim to drug-related psychosis. In Iyengar Yoga, one is taught how to use the Wisdom in the Body to bring about the “ N-O effect” related mental health issues. The use of KFIY ( Kripafoundation Iyengar Yoga™) is also within the Community of the WCCM. A special guidebook was published in 2008 by Medio Media Publications, Singapore, and is today available in 120 countries. From August 27 to 30, the Archbishop of Kuala Lumpur, with priests and nuns, will be participating in a workshop to learn how to use the body for meditation. This is the third year of such a workshop.
Most of the practice of Yoga in the West is connected with mere exercise, or some unorthodox cultic dimension. Fundamentalist Christians highlight them and condemn all forms of Yoga. It’s like throwing the baby out with the bath water. The affirmation by the behavior medicine has given more credibility to the use of Iyengar Yoga for meditation. The recent findings of the Harvard Medical School, especially by Herbert Benson, openly acknowledge the effective role of Yoga and Meditation by being able to change a Type A personality into a Type B personality. And this whole person recovery is the goal of Addiction Recovery, according to WHO. With this research and increased credibility Iyengar Yoga, one of the Harvard physicians dared to even say that “ Our bodies are wired to God” .In all residential facilities of Kripa, Yoga and Meditation are used to begin the day. The Mediation is in line with the teaching of Fr. John Main of the WCCM using “MARANTHA” as the mantra religious word. Kripa was the response to Mother Teresa’s sisters’ inability to handle addiction, while reaching out to the poorest of the poor. Hence, most of the free referrals in Kolkata’s Kripa Centre and elsewhere are through the Missionaries of Charity. It was she who inaugurated both the Vasai and Kolkata Centres, and we seek her constant blessings as we try to maintain her spirit of poverty and simplicity in all our work, especially on the 38th Anniversary of Kripa Foundation

Courtesy from:
The Examiner
10th August 2019

Posted by Kripa Foundation at 9:52 AM