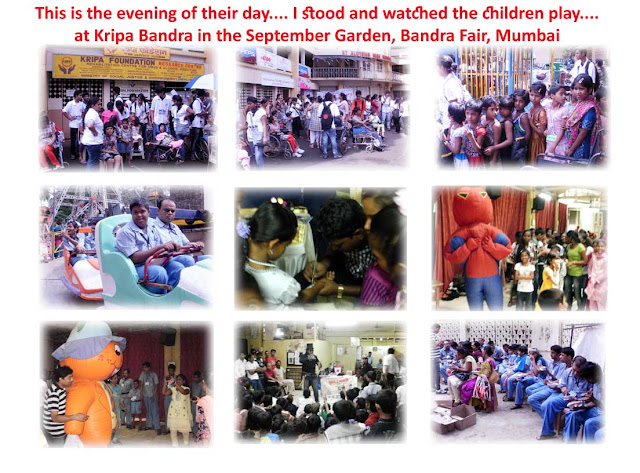 Nearly 800 children, including those with special needs, their teachers and volunteers participated in the annual fiesta hosted by the Fr. Joe (although in Canada was monitoring the program dail with the staff in its preperation) at it’s centre in Kripa Bandra (West), Mumbai on September 13, 2012. The day-long event included various attractions for children, their families and staff of institutions which are engaged in their care.


NGOs and other social service organizations that participated in the event included: Helpers of Mary, Shanti Dham, Sneha Sadan, Mother Teresa’s Roses, AK Munshi Yojana, Amchi Kholi, Kripa Dharavi, New Life International- which marked its maiden presence at the event, Nivaara, Aseema, New Kantwadi and the Spastic Society of India.
JustB’Cause, a social service group from St. Xavier’s College, the event organizers along with the Kripa Foundation, had made elaborate arrangements to host this annual event, to ensure that all visitors could enjoy the event. The program began with the arrival of children in special care of 11 NGOs spread across Mumbai and its suburbs, in the absence of their biological parents. A DJ regaled these kids and their teachers by playing the latest Bollywood hits and encouraging them into free-style dancing. These kids were followed by a group of children with special needs. Children continued to throng the venue till late afternoon, to enjoy dancing and singing and other myriad attractions lined up for the day.
These attractions included dancing with three mascots personating four popular cartoon characters, Spiderman, Robin, Pikachu and Jadoo (Magic). A game titled ‘Bombardment’ was held for these kids, during which participants had to gather near their favorite character, when the music stops. The announcer ‘bombs’ a particular group, which has to exit the game. Winners were given prizes by the organizers.
Another major attraction of the day was a magic show, during which the magician displayed various slick tricks. Children were also offered the opportunity to participate in these magic tricks, much to their delight. Another artist personated globally renowned comedian, Charlie Chaplin, arousing hearty laughter among both children and adults. A dance competition for children in various age groups also featured during the party. Later, organizers gave away prizes to children for various characteristics, such as girls with the longest hair, boys wearing an earring, and other such categories.
Volunteers from the Kripa Bandra family kept up the tempo of the party by showcasing their own talents such as dancing and comedy actions, which were widely appreciated by the children and adults. Children and their accompanying teachers and volunteers were also treated to a lunch, sweets, soft drinks and ice-cream.
The Thursday event was the 28th such to be held consequently since 1984, organized by JustB’Cause and hosted by the Kripa Foundation.
Submitted by
Ashwin Honawar
Brett Rodrigues
Kripa Bandra
Photos
Ashutosh Mandelia.
Posted by Kripa Foundation at 8:50 AM