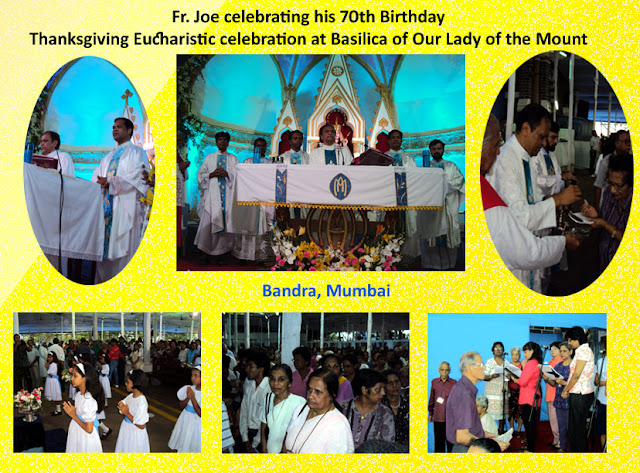 The 70th birthday celebrations of Reverend Father Joseph H. Pereira, Founder and Trustee, Kripa Foundation, were flagged off with a Eucharistic celebration  at the ongoing Novena to the Nativity of our Lady at the Basilica of Mount Mary in Bandra. Mumbai on September 6, 2012.
Addressing a mammoth gathering which had turned up for the event, Fr. Joe, in his homily, emphasized how Mother Mary is a role model for the entire mankind as she had given birth to Jesus Christ. He quoted the Biblical verse “For God so loved the world that He gave his only begotten son that whoever believes in Him may have eternal life (John 3:16).”
Fr. Joe lamented that hunger and love for God has become virtually extinct in the affluent, materialistic world, adding that communicating with God was vital. Satan, on the other hand, he noted, was making best use of modern communication techniques such as the Internet and satellite TV, which contain pornography, content that promotes substance addiction and other objectionable material, to corrupt young and mature minds, with the ultimate objective of destroying people.
These modern communication techniques, he noted, are also being cleverly utilized to counter Satan’s menace by spreading the word of God through the Internet and satellite TV, publications, Gospel teachings and fellowships in places, including where practice of religion is banned and other modes of communications. He cited the example of modern-day clergymen, equipped with gadgets such as mobile phones and iPads are visiting the sick and aged at their homes and hospitals. During such visits, these priests often allow the ailing person to contact their near and dear ones using such modern communications equipment. Several priests have also adopted the Power Point software to drive home the point during sermons, homilies and preaching. “Therefore, we have to express ourselves using the mass media in a very constructive manner to spread the word of God,” he added.
Fr. Joe also pointed out that our body is the and we can use it for communicating with Him. “Such communication with God can be achieved through daily contemplative prayer focusing on the word ‘Maranatha’ (Come Lord Jesus) while meditating. “ We ask Our Lady who is filled with grace and the Lord to make us like Her. Amen,” Fr. Joe, concluded. 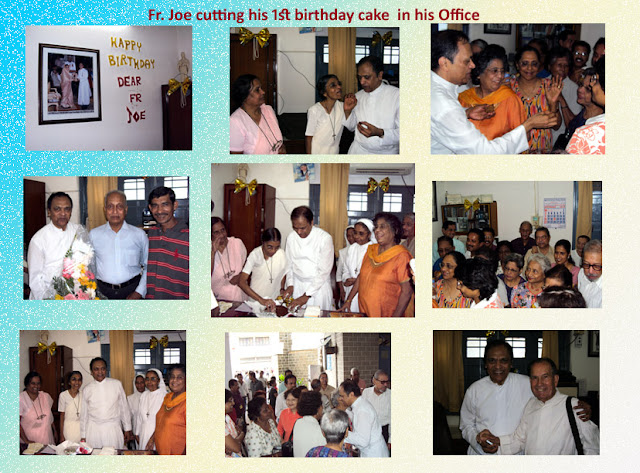 Keeping in line with the ongoing tradition, the first fellowship of Fr. Joe’s 70th birthday was held at his offices at on September 6, 2012 morning. Fr. Joe was accompanied by nun Sister Teresa, close friends from the religious and clergy, the choir of , staff at the Kripa Foundation and well wishers. The experience is unforgettable for all attendees since Fr. Joe personally shares the cake with them. This tradition of cutting the birthday cake in the morning at the office  is observed by Fr. Joe since many  years, with the birthday cake specially baked by the family of Constance and Simon’ families.
Newsdesk

Posted by Kripa Foundation at 9:18 AM