The festival of Navratri celebrated at Kripa Vasai 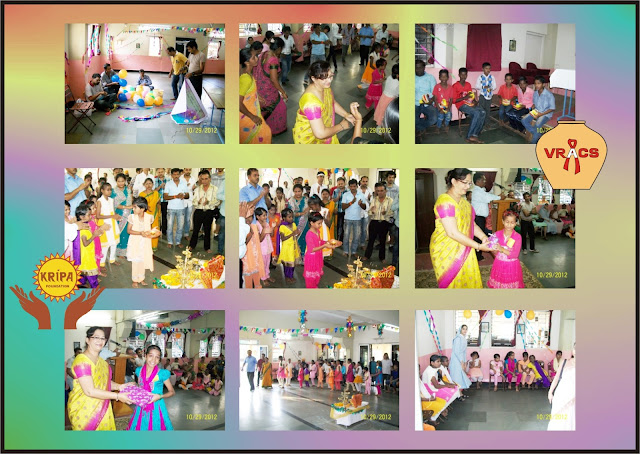 Navratri Celebrations
On 29thOctober 2012, a Navratri program was organized for the beneficiaries of Vasai Region AIDS Control Society (VRACS) and In-house clients of Vasai. The Guest of Honour was Mrs. Evette Coutinho who presided over the function.
A day’s effort by staff and beneficiaries was put in making preparations for the event. There was a pooja followed by the traditional ‘Garba’ dance. Clients and Staff of VRACS and Kripa Vasai participated in the dance. Another event was a fancy dress competition. The programme was well attended by about 150 men, women and children.
Prizes were given to the winners of the dance and fancy dress competition. Gifts and Snacks were distributed to all including health tonics to the children. The programme concluded with snacks and refreshments served to all.

Submitted by
Kripa vasai
Collage
Mozen H.
Posted by Kripa Foundation at 3:41 AM