CHICKEN AND FRENCH FRIES..OOH! WE ALSO DANCED AT THE SIDE 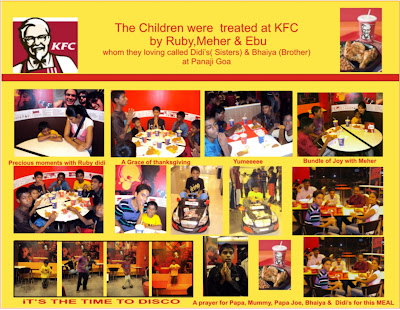 
At lunch it was announced that the children would be going to the park and later to KFC for a treat. After a good time on the beach the children were taken to KFC by Ruby, Ebu & Meher. Even before the children could settle down on their seats the food was served chicken, fried chips and a Pepsi with crushed ice. The children had a good time even dancing in the corner. Later the children were taken at the adjacent mall were they played on games and ran around with fun on the escalators, the security too had a soft corner and let the children enjoy themselves....
Submitted by
Rajan Wellingkar
Brett Rodricks
Edited by Francis Fernandes
Posted by Kripa Foundation at 7:42 PM