FOR THE CHILDREN FROM PARADISE- A DREAM BOAT RIDE 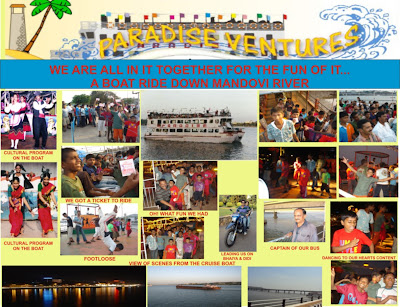 Double clik image for larger view
The children were taken for a boat ride on the Mandovi river. All excited, they boarded the boat each with a ticket dished out by Ebu & Meher at the gate. Being the first for many of the children they were stunned by the size of the ship. As soon as it was announced by the compere that they could dance to the live music, it was just footloose... stunning many people with their steps. Flashbulbs clicked their dancing by many tourists.To entertain them further, there were local cultural programs that lasted for an hour. On disembarkment the children were looking very sad as they wanted to have more fun. However on seeing Ebu & Meher on the dock they were all smiles as they rejoined their Bahiya & Didi again.
Submitted by
Rajan Welingkar
Brett Rodricks
Edited By
Francis Fernandes.
Posted by Kripa Foundation at 7:52 PM