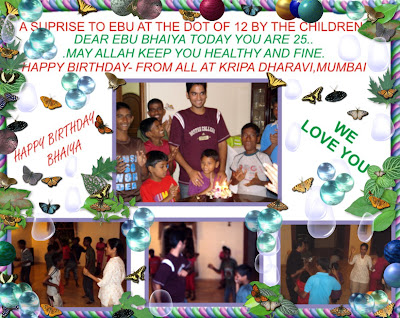 Double click image for larger view
So auspicious 25th Feb -25th Birthday -that was Ebu Bhaiya's birthday date. The children all together planned with Mummy, Papa, Ruby Didi, Meher Didi to suprise Ebu to cut a cake at midnight. All excited they were wondering how to get him down to cut the cake. They came out with a brilliant idea, the youngest child Amaan was thought to pretended and cry, the child did a fantastic job a great actor in him, his wailing got Ebu down from his bedroom running and worried...Imagine the roar, all were there to greet him his Parents, Rubina, Meher and 16 special guest. The glow and broad smile on Ebu's face said it all. later Ebu mentioned that this was his best birthday prayer for him, being with these little children and thanked his parents and Fr. Joe for letting it happen.The children went off to sleep after some dancing and eating the birthday cake.
Submitted by
Rajan Welingkar
Brett Rodricks
Edited by
Francis Fernandes.
Posted by Kripa Foundation at 7:35 PM