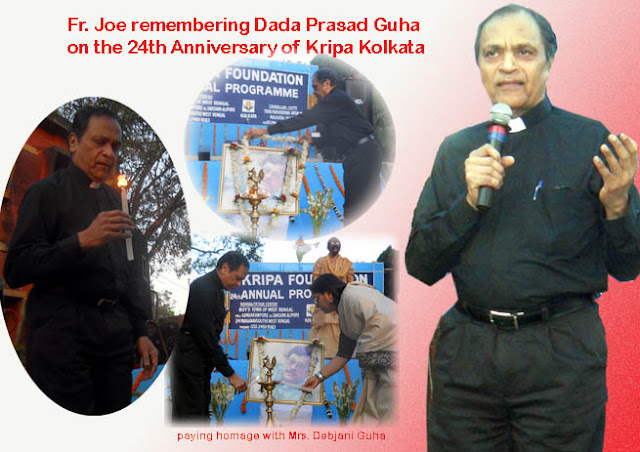 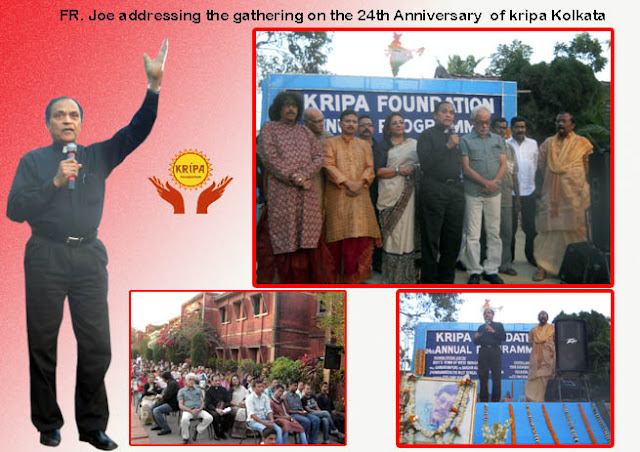 Kolkata  is the capital of the Indian state of West Bengal located on the east bank of the Hooghly river, it is the principal commercial, cultural, and educational centre of East India. The  port of Kolkata  is India's oldest operating port, as well as its sole major riverine port.  As of 2011, the city had 4.5 million residents; the urban agglomeration, which comprises the city and its suburbs, was home to approximately 14.1 million, making it the third-most populous metropolitan area  in India.
It is here that Fr. Joe with the help of late Mr.Prasad Guha started Kripa Foundation 24 years ago.
On the 9th of February 2013 Kirpa Kolkata celebrated its 24th Anniversary with much solemnity and fellowship.in the midst of Rev Fr. Joe H Pereira, Founder Manging Trustee of Kripa Foundation. The programme held at Gangarampur, now wholly owned by Kripa, started with the traditional lighting of the lamp and paying homage to late Mr. Prasad Guha loving called Dada. Fr. Joe was accompanied by Smt. Debjani Guha in placing a garland and lighting of the lamp in the midst of IPS officers, AA/NA members, and present and past patients and staff along with their families numbering nearly 400 people.
Fr.Joe in his brief speech praised the staff  and well wishers for their contribution in helping people coming into recoveries from Kolkata.  Fr. concluded his speech by reading out messages on the occasion from the Chief Minister of West Bengal Smt. Mamta Banerjee, letter from Mother House, Missionery of Charity,and letter of appreciation from His Grace Thomas D'Souza, Archbishop of Calcutta.
The programme was further celebrated by songs sung by Patients, ex-patients and the highlight being a song by Fr. Joe. Indeed a memorial day to all who attended the function.
Submitted by
Dr. Sandeep Mitra
Collage by
Newsdesk
Posted by Kripa Foundation at 7:24 AM