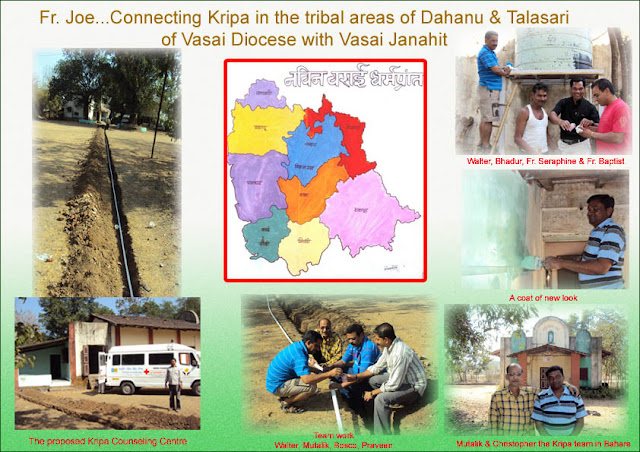 Bahare Paraspada in Dahanu, Maharashtra  situated in the picturesque Sahyadari mountain range in western Maharastra, merely 125 km north of Mumbai, is in a serene and sleepy region of Dahanu. Sandwiched between the chemical corridor of Vapi, Gujarat, to the north and the industrialised zones of Palghar-Boisar to the south, Dahanu remains one of the last surviving green zones in this region.
One amongst 15 talukas of Thane district in the Konkan division of Maharashtra, Dahanu is known as the fruit and food bowl of the region.


Predominantly having a large adivasi community of Warlis forming 64.84% of the total population of 3,31,829 lakh.Dahanu also has a large fishing and farming community. With a total of 174 villages and only one municipal area, the main source of livelihood is agriculture and its allied activities. Dahanu has the third highest area (47,606 ha) under forests amongst the 15 talukas of Thane district.
As  large part of the adivasi community resides in this zone, in remote, almost inaccessible, villages. In spite of a rich history of resistance, the adivasis are today either marginal farmers or work as daily wage labourers in orchards, brick kilns, or on boats earning a wage of Rs 50-80 a day, struggling to live off their slowly eroding forests. Many migrate for several months of the year to nearby places for work. It can be safely assumed that the entire tribal population is Below the Poverty Line (BPL) in Dahanu with the figures of BPL families as high as 69% which is approximately the population figure of the region.

It is these areas that the Church has developed many educational programmes and  development institutes for the tribals mainly warlis.


Viewing the massive problem within this vulnerable population, and viewing the statistics of alcohol prevalence users by the early bench mark survey done by the kripa team, along with members of Vasai Janhit ( in some villages as high as 67%). Fr. Joe requested His Grace Archbishop Felix Machado to help Kripa reach out to the people in these mission stations..
His Grace through Fr. Baptist Lopes –Director Vasai Janhit immediately responded and allotted a place for Kripa to operate from the hamlet of Bahare Paraspada. Fr. Baptist on seeing the urgent need of a water connection helped the Kripa staff to fix a pipeline from the main building water tank which is 300 metres away from the place allotted to Kripa.. Fr. Baptist and his team personally helped in the labour work.  A task force team sent by Fr. Joe from Kripa Vasai consisting of Fr. Seraphinus, Walter, Bhadur, Praveen, who helped Christopher and Mutalik to white wash the place and complete “ Project Connection” in a days’ time.
As the early team have already identified potential alcoholics in many padas, regular programmes for them will commence  shortly.

Submitted & Collage by
Newsdesk
Posted by Kripa Foundation at 1:13 AM