Fr. Joe speaks on the Role of Christian Faith in Addiction Recovery- at a lenten season programme in Vasai Diocese 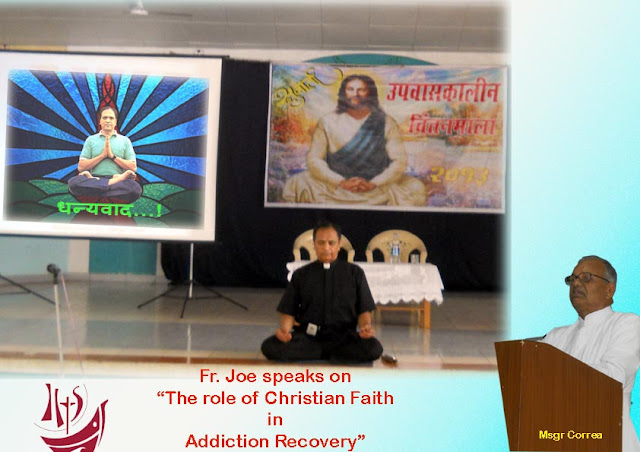 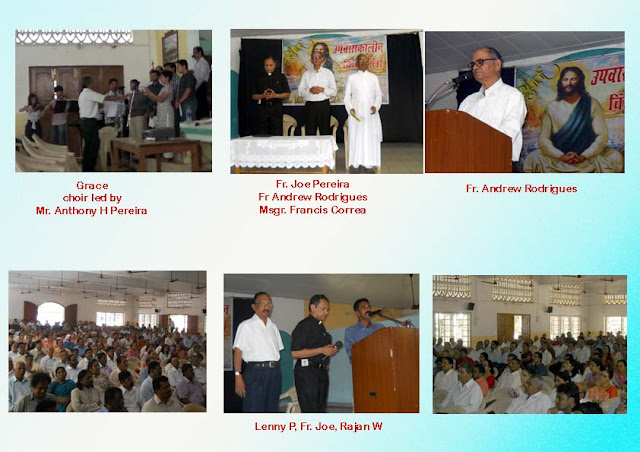 “When two or more are gathered in My name I will be in midst of them,” is a divine promise in the Holy Bible. This and other verses common to the Christian faith hold essential keys to recovery from devastating alcohol and drug addiction, Father Joseph Pereira, Founder and Managing Trustee, Kripa Foundation, told a nearly 400-strong gathering in Vasai (West) near Mumbai, at a seminar held on Sunday, February 24, 2013.


Addressing a seminar entitled ‘The Role of Christian Faith in Addiction Recovery,’ Fr. Joe said, the Kripa Model of Recovery is based on the 12-step program of Alcoholics Anonymous. These 12 steps, he highlighted, are based on Biblical and Christian principles such as placing unflinching belief in God-  power greater than oneself, honesty- one of the basics tenets of Christianity, confessions of our wrong doings with a resolve not to repeat them and other, all are commonly used in the Catholic faith. He stated that the 12-step program was developed by persons who followed Christian principles and hence, Christianity plays a major role in recovery of addicts. The seminar was held as part of the ongoing ‘Year of Faith’ by Kripa Foundation and to observe the Lent season.


The seminar also included an audio-visual presentation on the history of Kripa Foundation, made by Bosco D’Souza, National Program Director, Kripa Foundation and translated into Marathi, for benefit of attendees by Sanjay Joshi of Kripa Vasai.


Fr. Joe and the kripa Team were welcomed at the venue, Late Fr.Bhandari Hall, Dev talao, in Vasai (West) by Msgr. Francis Correa, editor of the Suwarta, a Catholic community publication from Vasai-Virar region, to which he contributes regularly. In his welcome speech, Msgr. Correa said that it was indeed a pride for Vasai that it’s son, Fr. Joe, had reached such great heights in serving mankind by helping substance addicts recover and helping HIV/ AIDS victims and to an extent that he was honored by the President of India, Pratibha Devsingh Patil with the Padma Shree, India’s highest civilian accolade, in 2009. He joked that Fr. Joe, by taking priesthood, had broken hearts of several young women of Vasai since he was a handsome, eligible bachelor while young. The Grace Choir played six traditional Lent songs at the beginning of the event, later   a meditation demonstration was given by Fr. Andrew Rodrigues.


Fr. Joe also spoke about the challenges faced by recovering addicts. He said, eminent psychologists like Carl Jung had proved that addiction can be cured through faith in God but Karl Marx had managed to overwhelm Jung with his theory that religion is the opium of the masses. Despite these challenges, faith continues to play an important role in recovery and rehabilitation of addicts. Similarly, many psychologists and physicians had tried to prove that faith had nothing to do with de-addiction and had been proved wrong.


Later, Fr. Joe also spoke on the benefits of meditation both for recovery from addiction and for non-addicts, to help improve quality of life. He gave a brief demonstration of meditation and spoke about the World Community of Christian Meditation, stating he would hold a WCCM workshop in Vasai soon. Msgr. Correa said, another seminar on Christianity versus addiction would soon be held with Fr. Joe to benefit the populace of the Vasai-Virar region. Fr. Joe ended the programme by singing the praises to the Holy Trinity in Sanskrit which kept the near house full audience spell bound, sending them home soaked with a better knowledge to combat addiction in the region Vasai- Virar.

We are deeply gratefull to Mr Royal D'Souza of Jeevan Darshan Kendra for his kindness of recording the whole audio program for us.This will be shortly available on our website.
Submitted by
Ashwin Honawar
Collage
Newsdesk


Posted by Kripa Foundation at 1:25 PM