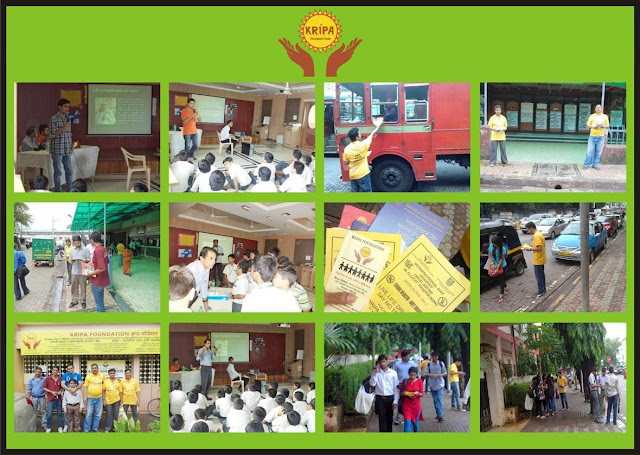 On the 26th and 28th June 2013, Kripa Bandra in collaboration with Narcotics Control Bureau conducted awareness programmes in different parts of the city to mark the occasion of Anti Drug Abuse Day.

Various colleges and Cinema halls were the target population at strategic locations to deliver specches, slide shows and screening of documentary film " Gods Grace". Display of posters and distribution of leaflets and badges to mark the vent which were sponsored  by Narcotic Control Bureau (NCB) and sharing of life stories of recovery were also part of the awareness.

The programme was a grand success as any doubts about addiction were cleared in the minds of the students there. Many of the students were shocked to learn the facts of raw addiction and its evil effects on the family and society. The theme for the day was well received and understood as fliers were passed around. The blooming enthusiastic minds of the students came up with numerous questions which were answered by the team

Submitted by
Kripa Bandra
Collage
Mozen H
Posted by Kripa Foundation at 2:31 AM