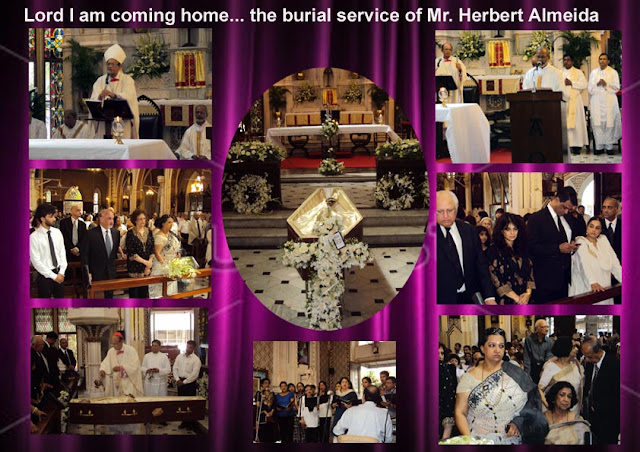 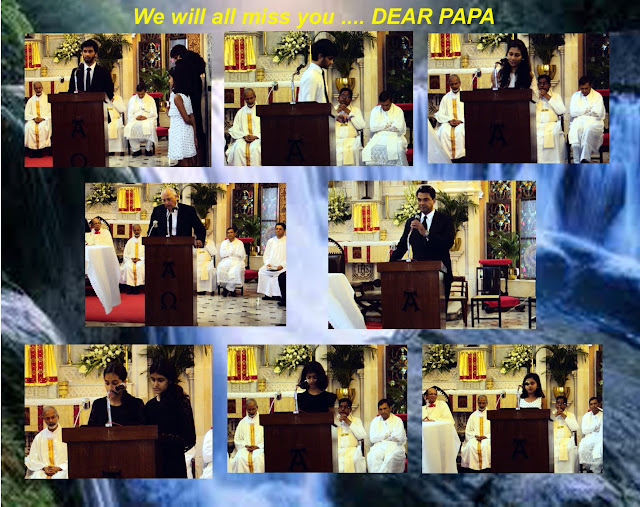 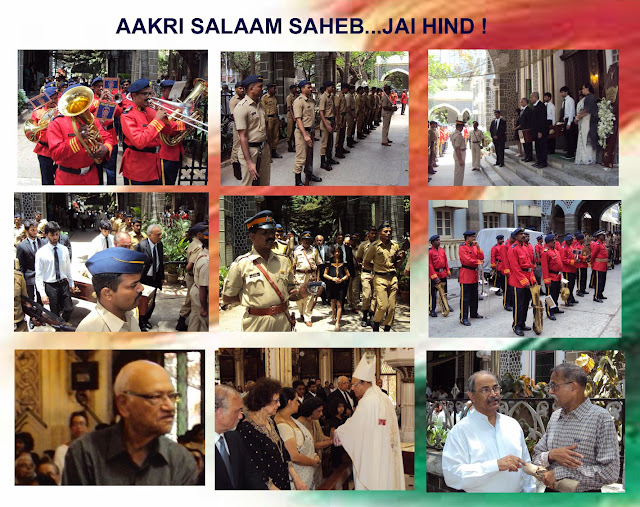 ‘A FEW GOOD MEN’ -  hard to find in today’s selfish world.  They serve the world and this country relentlessly and selflessly through their noble deeds and good actions, without expecting reward.  So indeed, it is a great loss, to lose our dear Trustee and Friend, retired IPS Officer, Mr. Herbert Almeida who belongs to this legacy.   We waved a final good-bye to him on Sunday, 26th May, 2013 at Wodehouse Church, Colaba. The kripa team, was presented by Sr. Theresa Pereira (nun sister of Fr. Joe, who officiated as the torch bearer in the absence of Fr. Joe who is doing programmes in Germany). Sr. Theresa was accompanied by many staff members of Kripa.
Tears streamed down the faces of family and friends who had gathered in large numbers for the final rites. His Grace  Oswald Cardinal Gracias who was the main celebrant at the Mass emphasized on  Mr. Almeida’s  noble achievements.  He stressed on Mr. Almeida’s altruistic attitude not only towards his family but also to society, and especially to Kripa Foundation.  His brother Robert Almeida on behalf of his siblings Late Norbert & Bertha Almeida, Late Hubert &  Philo Almeida, Robert  Iris Almeida Dorothy & Late Paul Cable Late Judy &  Brian Lobo gave a very pertinent eulogy to the crowd.  The grief and bereavement of   Mr. Almeida’s Children Jacqueline & Christopher Verma, Karen  Vivian Peres; Albert & Anita Almeida Lara & Sean Wassoodew was very apparent.

Mrs. Majorie Almeida wife of  Mr. Herbert Almeida stood tall in grief as she mourned in silence the loss of her life partner, yet wishing every one by name as they came to condole her.

His grandchildren Mikhail, Raoul, Rayhaan, Aalika, Taarika, Mika, Kiara, Aria tearfully  expressed their fond memories that he shared with them right through their childhood .His son Albert thanked each and every one right from his fathers personal aides to every one present at the funeral.

As the funeral mass was in progress in Mumbai, Fr. Joe walked the same path in Germany by offering a Eucharistic celebration, prayer and Meditation for the soul of his close associate and Trustee of kripa Mr. Herbert Almeida.

Truly, it will be a long while, before the world makes good this loss of a rare diamond, one of  ‘A FEW GOOD MEN.’
Submitted by
Brett Rodricks
Kripa Bandra
Photographs
Sheldon Patrao
Collage
Newsdesk
Posted by Kripa Foundation at 11:09 PM