Nostalgic moments as Fr. Joe connects with Kripa Vasai on its 19th anniversary from Germany -LIVE 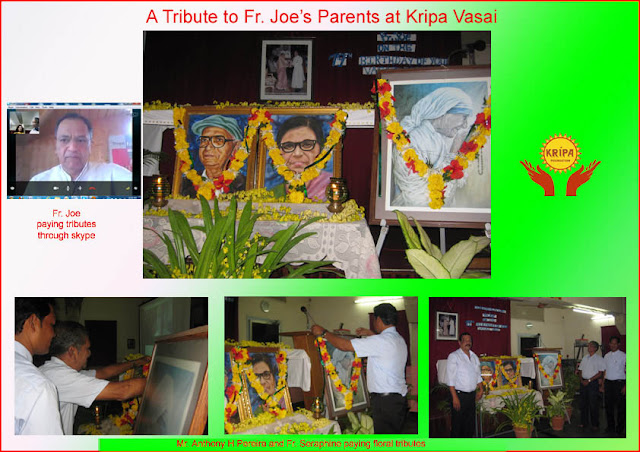 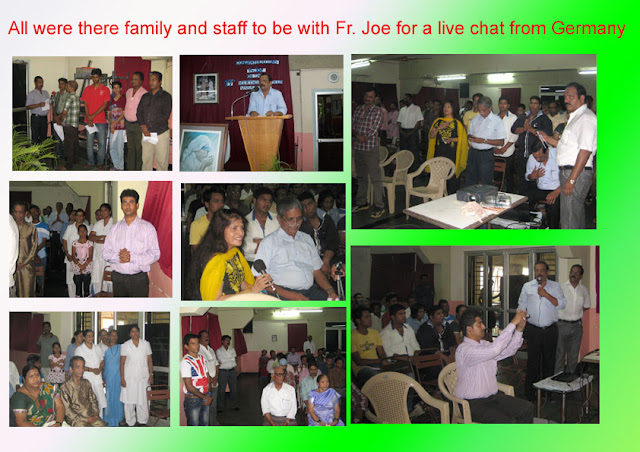 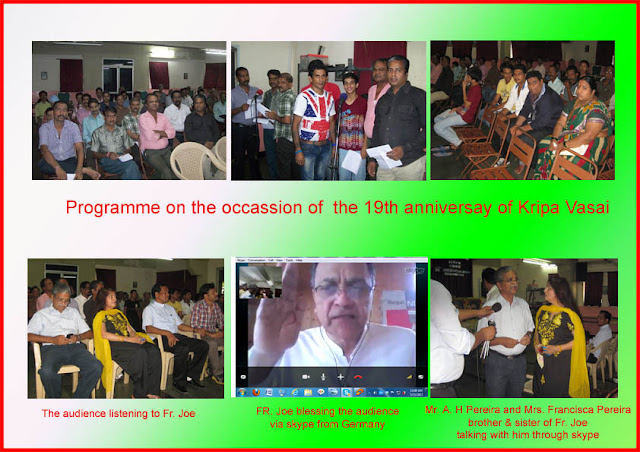 19th Anniversary Celebrations of Kripa Vasai
Kripa Vasai commemorated its 19thAnniversary on 15th May 2013 amidst a gathering of in-house patients, ex-clients; their families, staff, members of the VRACS Advisory Board and well-wishers.along with Fr. Joe' brother Mr. Anthony H Pereira and his sister Mrs. Francisca Pereira.
Fr. Seraphinus Ekka commenced the programme with the singing of hymns followed by an introduction of Kripa Vasai; its inception, progress, and setting up of VRACS, by  Bosco D’Souza.
In his speech Bosco spoke of the generosity of  Fr. Joe's parents (late) Mr. Hilary Pereira and Mrs. Martha Pereira for donating this land to build Kripa Vasai, He mentioned of how  Fr. Joe's  father lovingly called 'Papa' would always be there to guide and support the staff at the construction site in all kindness.  Bosco further  recalled how the whole Pereira family were very supportive to the kripa team including his nun sister Teresa, his nephew and two nieces. His most memorial moment being to be on stage besides Blessed Mother Teresa at the inauguration function of Kripa Vasai.
With technical back up the kripa team set up a live video conference with Fr. Joe in Germany and although having a busy schedule Fr. Joe was with the gathering live via skype. It was very touching to view Fr. Joe praying for his late parents from Germany and his brother Mr. Anthony H Pereira and sister Mrs. Francisca Pereira  simultaneously paying floral tributes to them in Vasai. In his  address to the gathering Fr. Joe shared some nostalgic moments of setting up the centre, about the kindness of his parents and all donors and staff who helped Kripa Vasai reach 19 years.
Mr.Anthony H Pereira regaled stories of their childhood that took us down memory lane, one such memory that he shared, was the time he and Fr. Joe would catch fish in the accumalated water in the compound and how they played marbles. Mr. Pereira also congratulated Bosco D’Souza for his hard work and perseverance that saw the progress of the Vasai Centre.

The highlght of the  programme was to have Fr. Joe connect with us through the live coverage made possible with the help of the staff of Vasai.
The programme ended with chanting of Hymns and a sumptuous lunch served to all.


Few messages we received on the occassion of Kripa Vasai's 19th annivesary.


"Congratulation Uncle Joe , Bosco and all the staff at the centre both present and those who have touched this place. Wishing you all the best for the future towardsworking to a addiction controlled enviroment and world" - Dr Edesel Pereira.


Heartfelt greetings to Vasai centre on the occasion of the 19th 'birthday'! It's so important to acknowledge such milestones in the growth of Kripa- Jim Pope
Dear Fr. Joe  & Kripa Family Congratulations on the 19th Anniversary of KRIPA Vasai. May God Bless you all abundantly-  Cyril


Congrats Bosco....it is all the hard work put in by Fr. Joe and you and your team....all the best.- Vandana Malik

Congratulation Fr. Joe and Kripa Thanks for sharing your love for me. How can I forget Kripa Vasai! Probably the only person who brought disgrace to this property (April 2005).. But, that is nature of the disease – an obsession so strong that it take one to the gates of insanity and hell. Thank goodness I am sober today. I now visit county jails and “tell my story!” Before I begin, I tell them ..that I’m there for myself and NOT for them. That itself generates interest! God’s grace  (Kripa) saved me - R. S.  USA.

Dear Fr. Joe congratulation on the 19th anniversary of Kripa Vasai , we cannot forget the great contributions that you have made for the growth of Kripa, our family prayers with you- Solomon & Family.

Dear Fr. Joe and Bosco, Congratulation on the anniversary of the Vasai centre that you built brick by brick to help people like me live a sober life.- Vijay P.